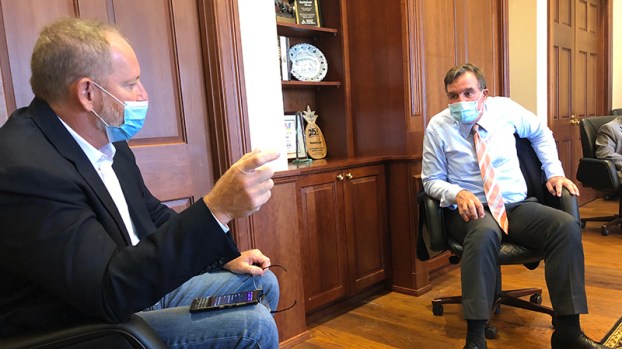 Ken Sullivan, left, CEO of Smithfield Foods, tells Sen. Mark Warner and other business leaders from the region how the pandemic has affected the company. Warner visited several communities in Hampton Roads on Sept. 3 to hear firsthand how COVID-19 is affecting business owners and the economy.

After a full day of socially-distanced meetings and conversations with business owners in Hampton Roads, Sen. Mark Warner said his takeaway message was that many people in Virginia “are still on the financial edge.”

Warner wrapped up a Sept. 3 visit through the region at a roundtable hosted at Smithfield Foods that included small business owners and economic development officials from Isle of Wight, Surry, Southampton and Franklin. Warner, a Democrat, engaged with everyone on a variety of economic topics, concerns and predictions.

Warner conceded he is concerned about the passage of the next federal economic relief package.

“Three weeks ago, I was more confident. I am worried now, and I feel like if either side tries to play this for political advantage when I think the real economy is much more in jeopardy than the stock market economy,” Warner said.

One of his predictions is that there will be another round of funding through the Paycheck Protection Program, although Warner said the scope to qualify for second round funding will likely be narrower.

Warner also said it’s possible previous Paycheck Protection loans less than $150,000 may be converted to grants, which was welcome news to some of those present at the roundtable. Much of the conversations focused on how the next rounds of federal funding could be better allocated.

Jessica Jones-Healy, president and chief executive officer of the Isle of Wight Chamber of Commerce, which is a 501c6 nonprofit organization, said: “It’s certainly frustrating to be serving 200 plus members, and connecting them to grants and money and we didn’t qualify for anything. So I’d love to see that fixed.”

Ken Sullivan, chief executive officer of Smithfield Foods, also sat in on the roundtable. Although it’s a big business that can better absorb an economic hit, “we’ve not been without costs too. In fact, we’re coming up on $500 million of COVID-related costs,” Sullivan said.

Warner said the COVID-19 pandemic has also laid bare another issue: the importance of expanding access to high-speed internet. “One of the things this virus has shown is that in 2020 and going forward, high-speed broadband connectivity is not a nice-to-have. It is a utility. And it’s time this country makes the commitment on broadband that we made on rural electricity back in the 1930s.”

The senator made several stops in Hampton Roads. In Virginia Beach, he met with members of the hospitality and tourism community. Later, he visited Suffolk to discuss how the ongoing health and economic crises have affected minority-owned businesses. Warner also received a private facility tour and conducted a press conference at the Ryan Keith Cox Post Office, in the Princess Anne area of Virginia Beach, where he urged congressional action to reverse recent policy changes implemented by Postmaster General Louis DeJoy that have affected mail processing and delivery.