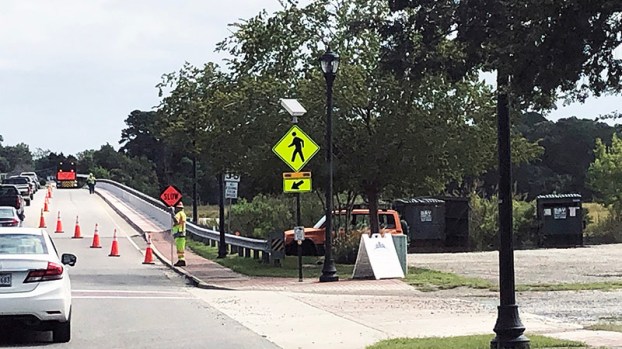 Traffic on the Cypress Creek Bridge in Smithfield backs up as travel is restricted to one lane during maintenance activities on Sept. 21. In 2022, the Virginia Department of Transportation plans to start a two year project to rehabilitate the bridge, which is 45 years old. The project will likely result in one lane traffic on the bridge for most of that time.

Starting in the fall of 2022, the Virginia Department of Transportation plans to undertake a major rehabilitation and partial superstructure replacement of the Cypress Creek Bridge, which carries two lanes of traffic over the water and serves as one of two main routes into Smithfield’s historic downtown district.

Residents may see utility relocation work in the area starting as early as next year, said Nina Ullrich, a VDOT spokeswoman. However, that work is not likely to require any significant bridge lane closures. But once that work does begin, “construction is expected to take approximately two years with a long-term single-lane closure in place during the majority of that time,” Ullrich said.

Nevertheless, “the bridge reconstruction will be an inevitable disruption to our downtown district,” said Jessica Jones-Healey, president and CEO of the Isle of Wight Chamber of Commerce. Like other recent projects on Main Street — road repaving and utility replacement — the bridge work “will most certainly challenge our ‘way of life’ downtown,” she said.

“From our parks, town offices, and downtown businesses (including the chamber), we will be finding new ways to navigate our ‘new normal’ while the bridge is being repaired,” Jones-Healey continued. “The chamber is working closely with the Town to monitor the timeline and what impacts it will have. As always, we intend to be a supportive entity to our members and businesses throughout this process.”

The estimated cost of the bridge rehabilitation is $7 million; a contract has not yet been awarded. The scope of work will replace the beams and deck in the bridge’s first three spans, along with an additional beam.

“These elements exhibit severe deterioration that cannot adequately be addressed with repairs,” said Ullrich. “Spans 1-3 have deteriorated faster than typical due to excessive sediment around the beams. The project will also include repairs and preventative measures throughout the structure.”

The existing Cypress Creek Bridge is 45 years old. It is 1,500 feet long. It’s made of a concrete deck, 26 spans of six pre-stressed concrete beams and one span of six steel beams bearing on concrete abutments and bents supported by prestressed concrete piles. The daily traffic count is 12,000 vehicles per day, according to VDOT. When the existing bridge opened in early April of 1975, it replaced an earlier drawbridge, which was demolished.

In the Sept. 12, 1973, Smithfield Times, the newspaper reported the State Highway Commission awarded a contract to Tidewater Construction Company for $1.79 million to replace the old drawbridge. That company also built the bridges that span Cypress Creek on the Route 10 bypass, as well as the 1982 span that replaced the original two lane James River Bridge that opened in 1928, linking Isle of Wight and Newport News.

Ullrich said the scope of the project, as it stands now, includes other repairs and preventative maintenance.

“VDOT has and will continue to engage with the Town of Smithfield in regards to this project to deliver the needed bridge repairs and minimize the construction impact to the residents,” she said.

“We have heard concerns regarding the traffic impact that the bridge work will have on residents as well as businesses,” said Smithfield Town Manager Michael Stallings. “We understand that the project will cause significant burdens for all that utilize the bridge to meet their transportation needs.”

Stallings said the town supports an incentive program to encourage the contractor to finish the project as quickly as possible. “We are also in favor of maintaining one lane of traffic during construction to allow for access to both sides of the water.”

One lane of through traffic will be maintained for the duration of the project, and “VDOT will continually monitor and make adjustments as necessary to the signage and timings of the temporary signals and alternative routes,” Ullrich said. “There are currently no planned disruptions to business access.”

The only potential for a full closure, she said, is if it is necessary for the final placement of a beam, for example. In that case, the closure “will be scheduled for the periods of lightest impact to the community.”

While the town will be involved, “ultimately, VDOT will dictate how the project is conducted, Stallings said. “We will provide input to VDOT in an attempt to help reduce the impact on our businesses and residents as much as possible.”

State Del. Emily Brewer, whose 64th district includes Smithfield, said she has been in communication with VDOT.

“I have not had any businesses yet reach out on this specific topic, but I understand the Town of Smithfield has had significant conversations with VDOT,” Brewer said. “When I spoke with VDOT, I encouraged them to select reduction to a single lane with rotating traffic so residents, businesses and visitors to the Town of Smithfield would not be as greatly affected as a total bridge closure.”

Smithfield Station — a hotel, restaurant and marina — is at the west end of the bridge, closest to downtown. However, when contacted by email, Randy Pack, the president of Smithfield Station, declined to comment on how the project might affect the business. Pack is also a member of town council.

However, another local business owner, R.K. Redlin, cited the bridge project as one of many issues that led him to close his downtown antiques store, Laura & Lucy, in March, when the COVID-19 pandemic hit Virginia.

“Basically the reason I closed in March was for like five reasons: No. 1 is I’m 76 now. My dog used to go to work now, she’s 14. We have the virus and of course we all know from listening to the news about the virus all the time, we know that if you’re in your 70s you’re in the most vulnerable age group category.”

On top of that, “having been in retail sales for 20 years, I knew this virus is going to have a major impact on retails sales, because people are losing their jobs, people are having reduced income so they start buying things that they need and not things they want. And my store was an antique and gift store, so it’s something that people have to want, not what they need.”

Redlin said recent infrastructure projects in Smithfield have taken a toll on commerce and tourism.

Still, Redlin said he isn’t planning to completely throw in the towel on his business interests. Once a COVID-19 vaccine is available, Redlin said he’d like to operate his business as a pop-up shop, offering sales about once every four to six weeks.

“The store has always been very successful,” he continued. “I’ve always made money at the store but I knew the primary thing is with this virus as contagious as it is at (age) 75, 76, I could not have the general public running in and out of there with me there. I love the store, I enjoy having the store, I enjoyed putting a good product out there, but if you don’t have your health, you don’t have anything,”

Smithfield  will add another chapter to its new normal once the bridge work begins.

“The chamber is working closely with the town to monitor the timeline and what impacts it will have,” Jones-Healey said. “As always, we intend to be a supportive entity to our members and businesses throughout this process.”

In commemoration of the more than 400 first responders killed in New York City on Sept. 11, 2001, Jimmy Auvil... read more