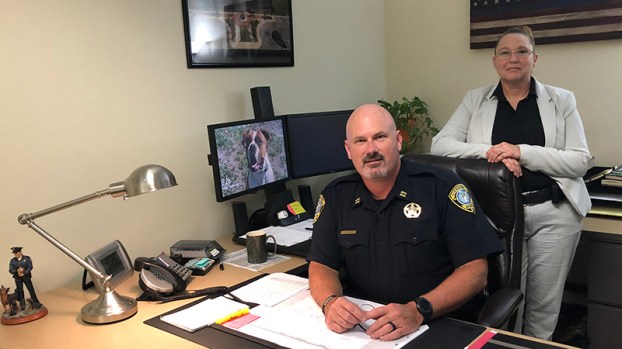 Capt. Tommy Potter, left and Lt. Susan Morgan of the Isle of Wight County Sheriff’s Office, were recently promoted to new roles within the organization. Potter now leads the operations division and Morgan will oversee the daily work of the investigators.

Tommy Potter is now captain of the operations division, and Sharon Morgan is now the lieutenant overseeing the office’s investigations division. Potter formerly held the rank of lieutenant and Morgan was a sergeant. Their promotions were effective Sept. 1.

“Operationally, anything that happens within the sheriff’s office, whether it’s policies, budgetary issues and basically supporting each one of the different divisions is what my responsibility would be,” said Potter. The investigations unit handles all major crimes in the county. Morgan also oversees property and evidence operations.

The divisions under his supervision are investigations — now led by Morgan — patrol and court services, which are also overseen by lieutenants. “I will work with each one of those lieutenants to make sure they have manpower and resources and support that they need to get their jobs done, everyday, so they can continue to serve the people here in Isle of Wight County,” Potter said.

Morgan is an Isle of Wight native who has spent her 15-year law enforcement career close to home.

Potter, a North Carolina native, has been in law enforcement for 25 years. He’s been with Isle of Wight more than 12 years. “I can say in my tenure here, there has not been a day that I woke up in the morning and said ‘I don’t want to go to work today.’ We have good, forward thinking leadership here,” Potter said.

“We have deputies, some of them born and raised here, like Lt. Morgan,” Potter continued. “We have people who aren’t from here but I think when they come here, they mesh into our Isle of Wight family very quickly,” Potter said. Morgan echoed that sentiment.

“We do work well as a family and everybody is close, especially back here, we only have about five investigators,” Morgan said. “We work well with everyone else, but (in investigations) we’re really close all day long. And when we go out and do something, the other person knows that the other one has their back.”

Potter said he and Morgan are humbled and honored to serve in their new roles. Both credit Sheriff James Clarke, for creating a professional environment where people see their colleagues as family, everyone is treated with respect.

Potter and Morgan acknowledged there’s a lot of attention on law enforcement and calls for reform right now, and in their new leadership positions, they will play a key role in shaping how people perceive and interact with their local police.

One way they can do that, Potter said, is “we need to look at the facts surrounding some of the issues going on around the country and we need to look to see how we are prepared here, how our officers interact with our citizens every day.”

“For our people that come to work here,” Potter continued, “this is not just a job they come to everyday, where they’re one of 200 officers or one of 300 officers. I think if you were to ask any of our deputies, they would say they come to spend time with their family every day, and family holds each other accountable, and that’s what we do.”

Starting in the fall of 2022, the Virginia Department of Transportation plans to undertake a major rehabilitation and partial superstructure... read more