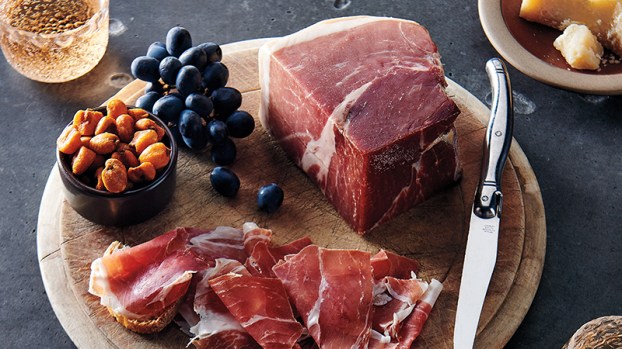 Edwards Smokehouse of Surry and La Tienda of Williamsburg have partnered on a unique new product.

Founded in 1926 in Surry, Edwards is a family-owned company. La Tienda was established in 1996. That family-owned company is “the largest e-commerce retailer of gourmet foods from Spain in the country,” according to Chief Executive Officer Tim Harris. The families have been acquainted for nearly two decades.

About five years ago, Harris said, entrepreneurs introduced Iberico pigs from Spain to the United States. Although Europe and America are a world apart, there are some similarities when it comes to raising pigs, Edwards said.

The pigs are raised free-range, so they’re allowed to forage for acorns, sweet mesquite beans and prickly pear fruit, which further enhances the flavor profile of the pork. The animals are also more mature when harvested, which also results in a more refined flavor profile.

“When you eat it, I don’t know how to describe it,” Edwards said. “It’s nothing like I’ve had before.”

“We’re curing the ham very similar to the way we cure our country hams,” he continued. “One of the benefits of an Iberico ham, because of its fat content, we can age those hams 18 months to two years and they can withstand that kind of aging because they don’t dry out so much because of the fat content.”

Modern pork, in contrast, is very lean. If cured the same way, salt would be the dominant flavor profile.

Harris agreed. The new Surryano Iberico is “different than European hams — it’s smoky and salty — whereas the Spaniards would never smoke an Iberico ham and they use very little salt. What we tried to do on purpose is to differentiate ourselves. We’re not trying to copy what they’re doing in Italy or Spain, we’re trying to make an American product.” Spain, Harris added, “has a tremendous tradition of cured hams that goes back thousands of years.”

A few years ago In Jamestown, ham bones were found at the bottom of an old well dating to the 1600s. Scientific analysis is under way to determine the origin of the hogs. “We think the first hams in Virginia were from Spain from Iberico pigs,” Harris said. “Wouldn’t it be cool if 400 plus years later, we’re making Iberico hams in Virginia again?”

Edwards compared the curing process to winemaking in a product announcement. “The varietal, location, and method of how grapes are grown are crucial, but then the vintner must take those grapes and apply their sense of taste, smell, eyesight, and knowledge to create the best wine. Similarly, a great ham cannot be made without starting with the best ingredients.”

Edwards said he expects market interest for the Surryano Iberico to lie mostly in the professional chef market. Sales of the ham began last month. Direct to consumers, the price is $550 each. Boneless and sliced versions will be available early next year.

Edwards also recently introduced a new version of a popular product — the Surryano Wedge. The popular ham is hand salted, smoked over hickory and then aged to create its deep flavor and rich color. The Surryano Wedge is available online for $120, and its smaller size is targeted at the consumers rather than professional food service operations.

As the holiday season and 2021 approach, Edwards, 64 said his business outlook is optimistic.

“I’ve seen some huge numbers of people in the food service business that have just closed and aren’t coming back. And that is a big part of our business, but fortunately because we’re not just food service, we also sell to retail stores, from specialty food stores like Taste in Virginia Beach and Norfolk, to Wegmans and Publix and places like that, they’ve been super busy.”

Overall, “it all kind of balanced out for us and if we sales-wise ended up the same or equal to last year or maybe a little down, we’ll feel fortunate that we survived this year,” Edwards said. And most importantly from the perspective of a business owner, he added, “knock on wood, nobody has contracted the COVID virus.” At his company, “we’re just thankful to be keeping everybody healthy through this whole process.”

A used car dealership plans to relocate from Smithfield to Carrollton. On Sept. 17, Isle of Wight County’s Board of... read more