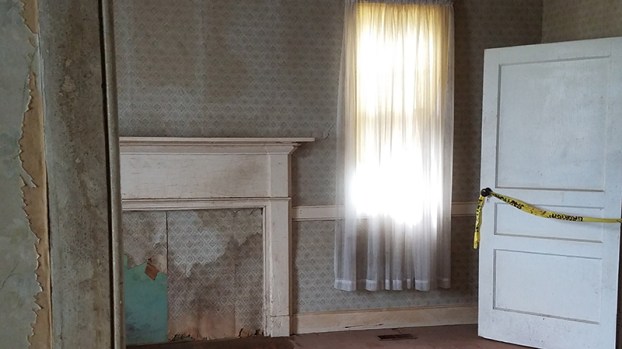 One room, marked with caution tape, has a bad floor, but other than that, the Wombwell house is “in really good shape,” according to Historical Society President Carolyn Keen.

Clean up at Wombwell

Members of the Isle of Wight County Historical Society gathered at Smithfield’s historic Wombwell house on Sunday to remove vines and debris from the yard in preparation for winter.

The organization hopes to convert the town-owned 1840s cottage, located on Main Street between Westside Elementary School and the Luter Sports Complex, into a headquarters for the Society. It has a contract with the town through the end of January 2021 for a feasibility study, which grants members access to the property, but the group is hoping to eventually negotiate a long-term lease.

“We call it mothballing,” Historical Society President Carolyn Keen said of Sunday’s work. “It keeps the weather out of it until we decide what’s the best way to go.”

Keen said several contractors have bid on the renovations, but the organization hasn’t awarded the contract yet, as it’s still working on raising funds for the project.

The historic home’s fate has been a local point of controversy for the past few years. In 2016, the town had put the house on the market for $1 to anyone willing to relocate it at his or her own expense. When that failed to attract a buyer, Smithfield’s Town Council voted in early 2018 to let the town’s volunteer fire department burn it down for a training exercise.

Town Council members had argued at the time that the house’s proximity to the new sports complex was a hazard to children playing nearby, but six months later, voted to delay demolition until 2019 when Preserve Smithfield, a local organization with the aim of saving historic buildings in the town, expressed an interest in the property. In January 2019, when the topic came up again, the Historical Society approached the town about the possibility of preserving the house at its current location and converting it into the organization’s headquarters.

Smithfield Mayor Carter Williams, who in past years had expressed an interest in the town constructing an indoor sports facility on the Wombwell site, had described the house in 2018 as having been built as “inexpensively” as possible, with “shoddy” workmanship. But Keen argues the house is worth saving.

“There’s one room with a bad floor, but other than that it’s in really good shape,” Keen said.

The house is named for Dr. Jordan Wombwell, sometimes listed in county records as “Womble,” who built and owned the house in 1842. According to Historic Isle of Wight by Helen Haverty King, the house is an example of the Tidewater cottage, an architectural form dating to the mid-19th century in the mid-Atlantic region.

Volpe Boykin, who will represent Carrsville on a task force charged with making recommendations to Isle of Wight’s Board of... read more