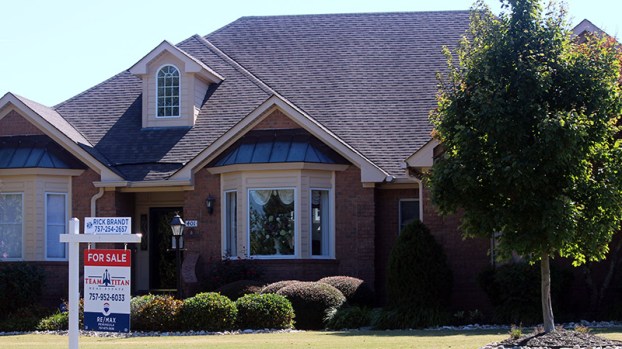 This four bedroom home in the Cypress Creek neighborhood is among properties on the market in and around Smithfield. Real estate industry leaders say that Isle of Wight is following regional and state trends on home sales during the ongoing coronavirus crisis.

Isle of Wight County mirrored regional, state and national residential real estate trends in the first six months of the coronavirus crisis, resulting in a spring sales slump followed by a summer surge, setting the stage for a strong seller’s market right now.

“Not only are many areas experiencing low inventories of homes for sale, the rental market inventory is also decreasing,” said Cindy Hawks White, who is chairman of the board of the Hampton Roads Realtors Association. “With multiple offers, many buyers become frustrated and end up renting and delaying their home purchase.” The association represents about 4,500 members.

Nationally, existing home sales continued to climb in August, which marked “three consecutive months of positive sales gains,” according to the National Association of Realtors. “Home sales continue to amaze, and there are plenty of buyers in the pipeline ready to enter the market,” Lawrence Yun, NAR’s chief economist, said in a recent announcement. “Further gains in sales are likely for the remainder of the year, with mortgage rates hovering around 3% and with continued job recovery.”

In spite of record unemployment and widespread financial uncertainty for many families, those issues definitely haven’t brought the market to a halt, according to Hawks White. “We have seen a growth in sales in Hampton Roads, including outlying areas Franklin, Smithfield and Isle of Wight, of 34% from this time last year,” she said.

“Job and income loss can obviously impact people’s willingness to buy/sell,” Sturtevant said. “However, during this recession, unemployment has been highly concentrated in a few sectors (e.g., restaurants, retail, hotels). Workers in these sectors tend more likely to be renters than homeowners/homebuyers. Workers in sectors that have been relatively insulated from the downturn have remained in the market, often in better financial positions than they were before the COVID-19 outbreak.”

In Isle of Wight, prospective buyers will pay a median home price of $355,995 according to Hawks White and $338,500, according to Sturtevant, which is “up 5% from a year ago.” Nationwide, the median price for an existing home for all housing types was $310,600 in August, according to the national association.

From March through May of this year, there were 160 homes sold in Isle of Wight, versus 192 sold during the same time in 2019, according to data from the state association. In June, July and August, 237 homes sold, versus 185 during the same time in 2019. In Virginia overall, 30,775 homes were sold from this March through May; that climbed to 41,502 in June, July and August.

Homes in Isle of Wight were on the market for 65 days for resale, versus 37 days for Virginia Beach, Hawks White said. “Smithfield and Isle of Wight currently have approximately three months of inventory supply, whereas Southside Hampton Roads it’s just under two months,” she said.

Sturtevant said Isle of Wight and smaller, more rural communities, should anticipate ongoing interest. “As a growing number of workers are working from home, smaller markets across Virginia will likely attract more interest from buyers currently living in other parts of the state, specifically in the state’s higher-cost urban areas,” she said. In addition, Sturtevant also said Isle of Wight’s available listings at the end of August was down 17% compared to the same time last year.

The national association said foreclosures and short sales represented less than 1% of sales in August. That was equal to July’s percentage, but down from 2% in August 2019. The organization represents people who are involved in all aspects of the residential and commercial real estate industries.

“The past few months have shown how valuable real estate is in the country, both to our nation’s economy and to individuals who have been given an opportunity to rethink their location and redesign their lifestyle,” said Vince Malta, the national association’s president. “NAR maintains robust advocacy efforts on behalf of our 1.4 million Realtors, including hundreds of thousands of housing providers — to ensure this industry can continue to lead in America’s economic recovery.”

Tornado touches down in IW

A preliminary damage survey conducted by the National Weather Service’s Wakefield office confirmed that a tornado touched down in Isle... read more