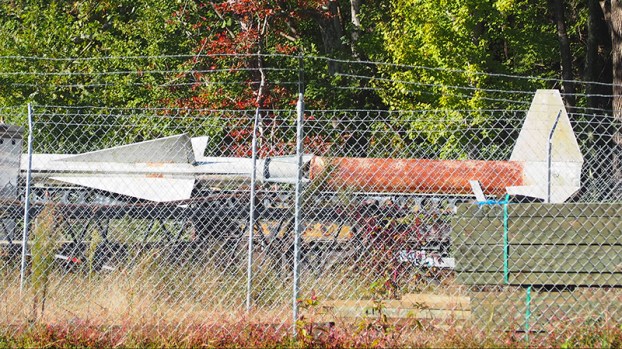 The city of Hampton donated this Nike-Ajax missile to Isle of Wight County last year for eventual display at Nike Park in Carrollton, but COVID-19 has put efforts to restore the missile on hold.

In a fenced-off area of Carrollton’s Nike Park near the cinderblock buildings that date to its Cold War days as an Army base sits another relic from the 1950s — a Nike-Ajax missile.

The park — named for the missile, not the sports apparel brand — operated from 1955 through 1961 as one of eight surface-to-air missile bases in the Norfolk Defense Area, intended to shoot down bomber planes from the former Soviet Union should they attempt to attack Hampton Roads.

But this particular missile isn’t original to the former Carrollton Nike Missile Battery N-75. Local historian Albert Burckard, who’s been lobbying for years to get such a missile for display at Nike Park, got his wish in 2019 when the city of Hampton donated one to Isle of Wight County. Since then, it’s sat idle in its rusted condition at the park awaiting restoration.

“It needs some love and care before it’s ready to be displayed,” said Isle of Wight County Museum Director Jennifer England.

Last year, Isle of Wight’s Board of Supervisors appointed Burckard and England to a committee headed by the county’s director of parks and recreation, David Smith — which the Board tasked with creating a plan for restoring the missile and determining exactly where within the park it will eventually be displayed.

Prior to COVID-19, the committee had been planning for a dedication ceremony on Veterans Day, Nov. 11. But it hasn’t met since the start of the pandemic.

“The whole process has been sort of on hold,” Burckard said.

Smith was out of his office through Oct. 20 and was unable to be reached for comment by press time. According to England, the committee has received “some ballpark figures” for what it would cost to restore the missile, but nothing definite. Two Isle of Wight companies, Knox Automotive and V.R. Edwards Sheet Metal, had offered to restore the missile for free last year, but Knox has since backed out.

“Some funding will need to be secured,” Edwards said.

But the amount needed will depend on whether the missile is displayed by itself or with its launcher. The missile itself is in fairly good condition other than being rusted, but its launcher is disintegrating in parts and will need some reconstruction, according to a staff report provided to the Board of Supervisors in February 2019.

“Last I heard, there were some discussions with the metal company … V.R. Edwards,” she added. “We would definitely be further along in this process if it hadn’t been for COVID-19, but we’ll get there.”

During the base’s heyday, more than 30 such missiles would have been stored underground, with soldiers stationed there awaiting an alert from Norfolk to launch. Though none were ever launched from this site, each missile had a range of about 30 miles.

By 1958, the Army had begun production of the Nike-Ajax’s successor, the Nike-Hercules, which had a range of about 75 miles and, unlike the Ajax, could carry a nuclear warhead. That same year, the Army began to modify Nike-Ajax bases to fire Nike-Hercules missiles. In some instances, as was the case with N-75, the Army deactivated missile operations altogether. From 1961 through 1971, the Army repurposed the site as a radio relay station.

The roughly 8-1/2 acres comprising the base-turned-park, which includes nearly all of the original buildings and three underground missile magazines, was added to the Virginia Landmarks Register and the National Register of Historic Places as a historic district in 2019. Isle of Wight County erected a recreational skate park atop the missile magazines in 2000.