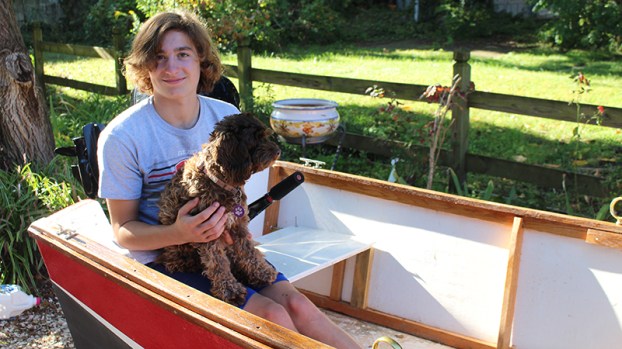 Ian Lindsay, 14, of Smithfield, sits with his dog Lola in a wooden skiff he helped build. Ian had help from his mom, Kerri Lindsay, and family friend Jim Perry to build the boat from scratch this summer.

Teach a man to fish, the proverb goes, and he’ll have the skills to eat for a lifetime.

The same is likely true for building a boat. Ian Linsday of Smithfield was inspired to learn, and with the help of Jim Perry, the two built a 14-foot wooden skiff from scratch. It can handle oars, but it’s also equipped with a nearly 10 horsepower outboard motor.

After months of construction, the new boat recently had a successful maiden voyage on the Pagan River. Ian, 14, and Jim, of New Kent, met through the Mid-Atlantic Paddlers Association, a non-profit that promotes canoeing and kayaking paddle sports events.

On a recent outing, earlier this year, Ian was in a canoe enjoying the water and thought, “It’d be really cool to have a boat.” He started looking online for old, used boats, but the cost was still prohibitive, and it was hard to find exactly what he was looking for. “Then Jim came along and he was like, ‘I’ll build a boat with you’ and I was like ‘OK’ and we started building a boat,” Ian said.

After COVID hit in the spring, by the time summer rolled around, Ian’s mom, Kerri Lindsay, said boredom was high, so it’s no surprise her water-loving son was looking for something to do.

“He came to me and said I want to buy an old, metal aluminium boat. He was looking online for boats for sale for next to nothing. I didn’t really like the idea of that, trying to find some metal junker.” She brought up the idea with Jim and he jumped at the chance to do a project.

“I knew he was a wood craftsman, specifically boats, and he offered right away,” Kerri continued. “I presented that to Ian when I came back home and he loved the idea. So I encouraged him to do it and it took off from there.”

This was Ian’s first time crafting a boat, but Jim has built several over the years. They started working in July a few days a week. Perry, a retired professor of marine science at the College of William & Mary, isn’t a boat building professional; he does it just for fun. “I actually spend a lot of time on the Eastern Shore. I love being on the water,” he said.

The boat is made of plywood, some oak, mahogany and fiberglass. Some of the wood is stained, some is painted, and it’s complemented by a deep, rich red paint job, touches of shiny chrome and a rather imposing-looking black motor with “Mercury 9.9” emblazoned on the side.

Kerri also did some hands-on work.“They had me do some sanding and I guess my claim to fame is as a painter. So they decided on the colors and I did the painting,” Kerri said.

Although you don’t need a permit to build a boat, you do need one to put it on the water, so the boat also has all the requisite state stickers and registration. Kerri did the behind-the-scenes work — registering and titling the vessel and installing a hitch on the car, and “I made sure [Ian] got his boating license,” she said.

The plywood used on the boat is a special type called AC plywood. “Normal exterior plywood doesn’t hold paint well. So we wanted to get some exterior plywood that wasn’t treated that also had a very fine finish on it,” Perry explained. “The only place we could find it was in Gloucester. So we took the truck, went over to Gloucester and picked it up.”

One of their partners in the paddling group overheard their plans and shared that he had a boat trailer on his property that he’d been looking to get rid of for years, so they got it for free and gave it a fresh paint job and a few updates to the wiring.

In contrast with the newly built skiff, Perry said it typically takes a year to build a canoe or kayak, which are made with cedar strips in layers of wood, sanded and sealed. The skiff, on the other hand, is built on a frame which comes together more quickly.

On a recent afternoon, Ian and Jim were putting some finishing touches on the skiff, which they christened Lola after Ian’s dog. Jim said his dad was a carpenter, “so I grew up with him building stuff all the time, and when he passed, I got all of his tools.” One day he wondered if he could build a boat, decided to try “and realized I could do it.”

“I’m very proud of him for following through and doing it,” Kerri said of Ian and his boat project. And, she added, “I can’t express how generous Jim has been with his time. He’s a very good teacher, very patient. He’s been great.”

At about 220 years old, the Carrollton House continues to stand the test of time. The building near the intersection... read more