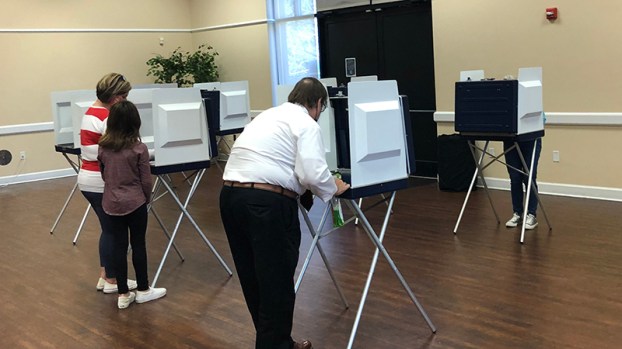 Poll worker Eddie Drake, in the foreground, sanitizes a voting booth at the Smithfield Center on Tuesday while voters fill out their ballots in the background. (Nate Delesline III/The Smithfield Times)

By 6 a.m. Tuesday when the polls opened, just under half of Isle of Wight County’s registered voters had already cast their ballots.

According to Voter Registrar Lisa Betterton, 9,838 voted early in-person in the days leading up to the Nov. 3 election, and another 3,607 had voted by mail. The mail-in ballot count could still go up, she said, as Virginia election law allows absentee votes to be counted through noon this Friday, so long as ballots are postmarked by Nov. 3.

The 13,445 county residents who voted early this year account for roughly 63% of Isle of Wight’s 21,075 total votes cast during the 2016 presidential election.

After strong in-person turnout first thing in the morning, workers and voters settled into a relaxed routine at the Cypress Creek precinct on Church Street in Smithfield.

The polling place was previously at Good Shepherd Catholic Church. However due to concerns over COVID-19, church leaders closed the building to the public and the voting site was relocated nearby to another church, Smithfield Assembly of God.

When the polls opened at 6 a.m., “it took us about an hour to clear that first group of people,” said precinct chief Bobbi Donnelly. In fact, when she drove up to open the building, voters were already in line and “I think there was one voter in the car, in the parking lot when we pulled up at 5 o’clock,” Donnelly said. “I guess he wanted to be first.”

But by just after 9:30 a.m., the pace had slowed considerably. “I think it’s going to be pretty much like a regular November as opposed to a presidential election,” she said. “Because more than half of our voters have already voted, either in person or through the mail.”

Donnelly has worked the polls for about 10 years. “I just love working with my poll workers and seeing the same people every time — neighbors, friends, church members.” About 2,800 people were assigned to that polling place, and more than 1,400 had already voted early. “That will definitely cut down on our traffic today,” she said.

Asked to share their experience, a few voters who cast their ballot in person described it as smooth.

Jorge Garnero was among the voters who cast their ballot around 9:30 Tuesday morning. “It was super fast and very clear,” he said. “And very well organized,” he added. Husband and wife David and Donna Burgess had the same sentiment.  “It was very pleasant — no problems whatsoever,” said Donna Burgess. “It was very smooth — everything went great.”

“So far it’s pretty interesting,” said Bachman, who was at the front door greeting voters and offering informational brochures. He’d also taken a turn scanning people’s identification and joined the other workers before sunrise to set up the polling site.

“I’d already voted, and I figured this was something I could do instead of staying around at home,” he said. “Obviously, it’s helping people do their civic duty to vote.”

In the background, as Bachman talked about his experience, Donnelly and another poll worker offered up a sincere and enthusiastic and but muted cheer and applause for a person who identified themselves as a first time voter.

Because so many people voted early, “this is a good time to train the new [workers] because we’re not so overwhelmed,” Donnelly said. “We started them out with handing out stickers and the easy jobs and I’m slowly rotating them into positions that need a little more training, like the poll books.”

After the initial rush, the next busy period is typically lunchtime, Donnelly said. “I get a good dose of the retirees at lunchtime on their way to lunch or after lunch. If they’re going to come out for the day, then they’re going to make one or two stops.”

Donnelly said nice weather also makes the day more pleasant for everyone. “We’re so glad it’s not raining today — so thankful,” she said. “And the ballots don’t like moisture,” she added.

As far as getting people in and out, “right now the only thing that’s slowing us down is cleaning the privacy booths because of the coronavirus,” she said. Everything is cleaned after each voter. “We just pause the line for a minute or two and everything’s good.”

The pace also seemed steady but smooth at the Smithfield Center voting precinct. Check in tables, voting machines and support workers were very spaced out in the center’s function room.

“I wanted to come in person because it was more convenient for me,” said voter Shanise Scott. Voting in person on Election Day was her choice versus needing to take time out on another day or remember the different rules and deadlines that apply for early or mail-in voting. This was her second time ever voting — she last cast a ballot four years ago.

“I was supposed to vote two years ago, but I messed up my district because I’m in college, so it kind of messed up everything,” said Scott, who is an Old Dominion University student. She’s since fixed that issue so she won’t have the same problem going forward.

Seven miles northwest of Smithfield, 567 voters had cast their ballots at FIrst Gravel Baptist Church in Rushmere as of early Tuesday afternoon as first-time voter Teaja Wilkins, 19, approached the polling place. Seven miles south, another 218 had voted at the Isle of WIght Ruritan Clubhouse across the street from the county’s courthouse complex. In the town of Windsor, 456 had cast in-person votes at the Windsor Town Center.

Poll workers at First Gravel Hill and the Windsor Town Center reported being very busy early Tuesday morning, but settling into a steady pace later on.

Many voters in Surry County also took advantage of early voting options. Registrar Sharná White said in an email that as of Monday, 2,623 people voted early out of 5,597 total registered voters in the county.

Teach a man to fish, the proverb goes, and he’ll have the skills to eat for a lifetime. The same... read more