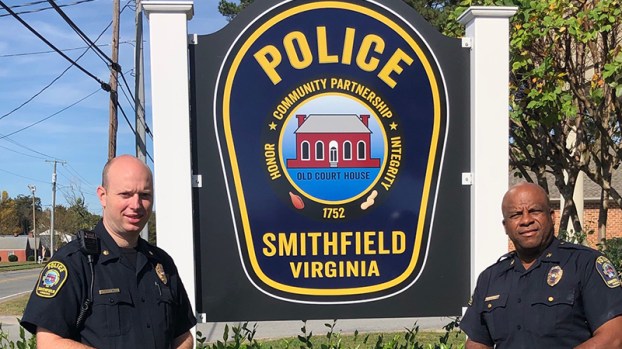 An officer who started his law enforcement career in Smithfield is now the department’s deputy chief.

Chris Meier joined the Smithfield Police Department in 2008. He assumed his new role as second in command of the force in September. As deputy chief, Meier serves as a liaison between the chief and the town’s elected and appointed leaders and the citizens the officers are sworn to serve and protect.

Before being named deputy chief, he was the patrol lieutenant. In his new role, he’s still in charge of patrol and also oversees investigations and a handful of civilian support staff. The department has 22 sworn officers, including himself and Chief Alonzo Howell.

Meier is a Marine Corps veteran who is part of a military family; his father also served in and retired from the Navy. In the Marines, Meier worked as an air traffic controller, “except it was more controlling dogfights and Top Gun type of stuff instead of commercial air flights.”

Next summer, he’ll mark 13 years with the department. When his parents decided to move to Texas, his dad’s home state, Meier decided to stay in Hampton Roads. “Virginia is the longest I’ve lived anywhere,” he said.

Police work “is a service-type profession, and I’ve been serving the community for all this time and now and it’s great to serve the officers and help them get what they need to do their daily job and mold the department to be better for the community,” Meier said of his new job.

In his new leadership role, Meier said he will focus on developing a recruiting unit and officer training.

Because Smithfield is near larger cities, it’s tough sometimes for the town to stand out and recruit and keep good officers, especially younger people who want on-the-job action that a small town doesn’t usually deliver. And regarding training, “I feel like if we want to have great officers, we need to first recruit great people and then second, train them to the standard that we want them to be at.”

Being out in the community is also important, Meier added, a belief the chief also shares.

“We try to be out there in the community, seen by the community,” Howell said. “There used to be the philosophy that we’re always there when things are bad. But that’s not always the case. We don’t always bring bad news.”

Howell said Meier is “not afraid of a challenge, he has the welfare of the officers in mind and he has a can-do mindset. He’s ready to tackle it and face it head on. He keeps me in the loop with the challenges he’s dealing with and the challenges we’re dealing with as an agency.”

Social justice upheavals and a tense national political climate have thrust public perception and trust of police to the forefront in 2020. Despite a tumultuous year, Howell said he’s confident law enforcement can regain the public’s trust.

“And the way you do it is you get out and interact with the public. You have to let the public know that you’re human as well. I enjoy getting out and talking with the citizens.” Howell said members of the community should feel free to reach him by phone. Even if it’s not a situation for the police, “we try to resolve whatever issues come before us,” he said.

One way they’ve built trust and community connections is through the department’s inaugural citizen’s police academy last year “and we’re very proud of that,” said Howell, who served as deputy chief before being named the town’s top cop in 2017. Once the COVID-19 situation is under control, “we’re hoping to start that back up.”

When not on duty, Meier enjoys PC gaming and is a football fan, supporting the Green Bay Packers. The SPD also recently announced on Facebook that Officer Eric Phillips has been promoted to patrol lieutenant.

Cynthia Eley has been working in food service at Isle of Wight County Schools for 16 years. From her perspective,... read more