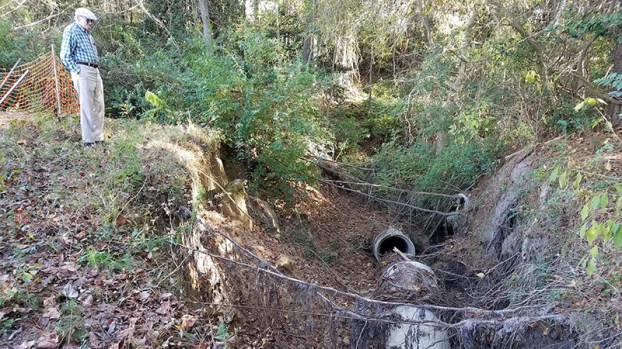 A collapsed stormwater pipe has washed away a sizable portion of Otis Brock’s backyard, leaving a chasm more than 20 feet wide and about 12 feet deep.

Carrollton homeowner Otis Brock has been trying for years to get Isle of Wight County to take responsibility for a collapsed stormwater pipe in his backyard.

Now, he’s retained a lawyer and plans to take the county to court to resolve the issue.

A sizable portion of Brock’s backyard has washed away, leaving a chasm more than 20 feet wide and about 12 feet deep plus the exposed concrete pipe, which has broken apart in multiple places.

“I lost 3-½ feet yesterday when the big rain came in,” Brock said, referring to the rainfall that occurred overnight Sunday to Monday. Brock had erected an orange mesh fence around the affected area to keep children from falling in, but that too has now fallen into the ravine with the recent rain.

No one’s actually fallen in yet, but, “it’s getting bigger and bigger,” Brock said.

According to court records, there’s a 20-foot easement in place for the pipe — 10 feet into Brock’s yard and another 10 feet into Brian and Susan Fernaays’ yard on the opposite side of the chasm — but a specific owner of the easement wasn’t designated in the early 1990s when the stormwater system was installed. Circuit Court Clerk’s Office personnel say easements such as this are typically deeded to the developer of a subdivision or to a homeowners’ association.

Nina Ulrich, a spokeswoman for the Virginia Department of Transportation, confirmed the easement isn’t deeded to the state and “VDOT has no maintenance responsibilities for the pipe.”

But Brock’s attorney, Joe V. Sherman, argues the county has a “common law duty to deal with stormwater.”

“That’s why they collect stormwater tax,” he said, referring to the $54 fee Isle of Wight adds to residential property owners’ real estate tax bills every year, which is intended to be used for stormwater management.

By not taking responsibility for the maintenance of outfall pipes like the one on Brock’s property, the county is “transferring the burden of maintaining public stormwater easements to the private property owners,” Sherman said.

Isle of Wight County neither confirmed nor denied having responsibility for the pipe’s upkeep.

“Determining responsibility for upkeep of the easement is the issue the potential litigation is attempting to address, so we are not able to comment on that matter,” said Assistant County Administrator Don Robertson.

Sherman, who is representing Brock and the Fernaays family, expects to file the pending lawsuit by the end of the month.

An officer who started his law enforcement career in Smithfield is now the department’s deputy chief. Chris Meier joined the... read more

Local student says thanks to military