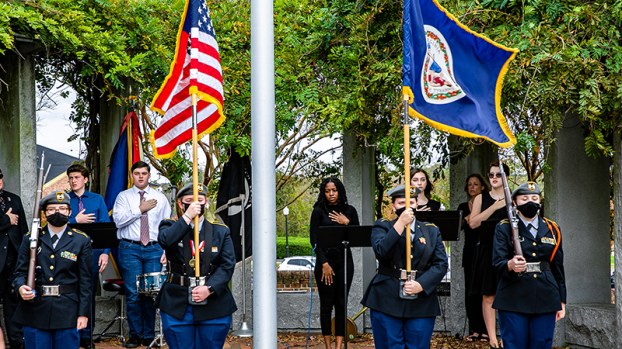 Members of the Smithfield High School JROTC presented the flag, and a musical ensemble from the high school sang the national anthem, during a Veterans Day ceremony on Nov. 11.

No matter how, when or why they served, every U.S. military veteran is worthy of honor.

Residents of Smithfield and surrounding communities gathered at the Isle of Wight Veterans Memorial at 11 a.m. Nov. 11 to reflect and commemorate Veterans Day through personal stories and tributes.

“No matter what branch you served in, whatever your job or career series or how many years you served, raising your hand and leading yourself to service in the military was a brave and selfless act, one that came with few guarantees of where you might be assigned, whether and where you might deploy into harm’s way and in some cases, if you would return home in one piece, if at all,” Hamilton said.

Hamilton entered the military through the Air Force Academy in 1988. Less than an hour after swearing in, he faced one of his first challenges — building trust and common ground with two randomly assigned roommates who were sharing a space “the size of a small walk in closet.”

Hamilton, an Irish Catholic from New Jersey, was roomed with a Hindu American from Detroit and a Baptist African American from Tennessee. “We did not have time to focus on our differences,” Hamilton said. Instead, they focused on the common goal of meeting whatever challenges the military training instructors threw at them.

In the wake of months of social upheaval and political divisiveness, “I think our nation once more needs its veterans to lead in pursuit of this hope for a better future,” said Hamilton, who served for 30 years at bases throughout the U.S. and overseas. He holds more than a dozen military awards and honors and continues to support the military in a civilian role as associate director of intelligence for air combat Command, at Langley AFB in Hampton.

Formerly known as Armistice Day, Veterans Day was first celebrated in 1918 to mark the end of World War I. The holiday “honors all those who have served the country in war or peace — dead or alive — although it’s largely intended to thank living veterans for their sacrifices,” according to the Department of Defense.

“My reply to him is ‘Yes you are, but I’m calling because I’m thinking about you and I realize, most likely on Memorial Day, you’re thinking about those you served with that did not make it home.’ I try to count my blessings often. I hope that we all realize how blessed we are to live in a country where people are still willing to sacrifice in order to preserve this nation,” Acree said.

Regardless of how or why someone entered the military, “the point is that all veterans that served our nation for any reason have made sacrifices for our security and freedom. Our veterans’ sacrifices have made our nation the strongest nation in the world,” Acree said.

U.S. Rep. Bobby Scott took the microphone to share words of appreciation for military veterans, as did Smithfield Mayor Carter Williams, a Marine Corps veteran, who noted that military spouses and family members also sacrifice greatly in supporting their loved ones.

The commemoration included plenty of stories, opened with the ceremonial sounding of bells, the presentation of the flag by members of the Smithfield High School’s JROTC unit, the singing of the national anthem by a Smithfield High ensemble and it concluded with prayer and the playing of Taps.

When he first began attending meetings, Matt Streeter, first vice commander of the Smithfield American Legion, said a sticker at the building’s back door caught his attention. It says “Land of the free because of the brave.”

He said Veterans Day is an opportunity to pause and honor all who serve for the greater good. “In these challenging times,” Streeter said, “I think it’s important to sustain this recognition like we’re doing today.”

Isle of Wight officials declared a local business-boosting initiative a success after implementing a do-over one day after the website... read more

Local student says thanks to military