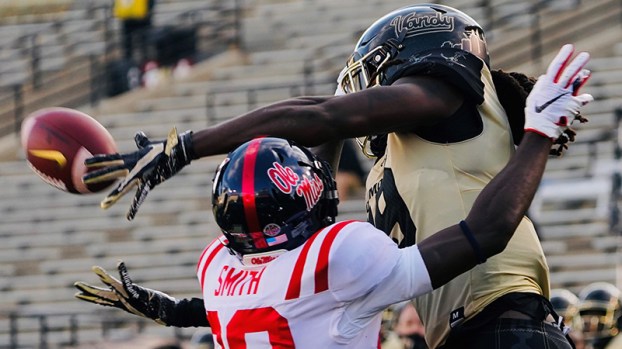 Former Smithfield High standout Chris Pierce Jr. reaches for a catch against Ole Miss in a game last month. Pierce is having a solid senior season for Vanderbilt University.

Chris Pierce Jr. is trying to finish strong in his college football career.

The Smithfield High School graduate has overcome a knee injury to be on pace for a career year, ever timely because of the senior’s desire for a playing career after college.

Through five games, the Vanderbilt University wide receiver tied for second on the team with two touchdown receptions, a career high, and was fourth on the squad with 13 catches.

“His biggest strength is something you can’t coach. It’s his size,” said Vanderbilt wide receivers coach Tony Ball. “He’s got a long frame, which gives him a bigger catching radius.”

At 6-foot-4, Pierce and a teammate are the tallest of the Commodore wide receivers, though Pierce is the heaviest at 231 pounds. He is especially adept at catching balls thrown a little higher, out of reach of shorter defenders. “He’s got very sure hands,” Ball said.

His first touchdown reception this season showcased his ability to use his size to the team’s advantage. He beat a cornerback in man coverage on a route near the left sideline, reaching back to grab a 16-yard pass with 23 seconds remaining in the first half.

“It was a typical slant and go,” said the son of Christopher and Doreatha Pierce. “He was on my inside shoulder. I pretty much had to jump over him.”

He had four receptions, then a personal best, for 46 yards. Three catches resulted in first downs, including two on consecutive downs during the third quarter.

That game was the best he has felt since injuring his left knee in a practice before games started, he said. He said he suffered a lateral collateral ligament sprain and bone bruise when he was battling a defensive back for a pass.

He took two weeks off to heal and has been wearing a knee brace in games. “It’s part of the process,” said Pierce, who played in nine games as a true freshman. “I have to go to work every day.”

Since his time in the program, Vanderbilt’s passing attack has been a shared effort. Fourteen players had receptions in 2018, 13 in 2019 and 12 this season, according to online records. Ball said Pierce becomes a target when the coaches see a matchup with a defensive back they think they can exploit.

He had a career-high six catches for 76 yards and one touchdown against Mississippi State in the fifth game. That performance brought his average yards per catch to 11.62, second among the five Commodores who had at least 11 receptions. His 151 receiving yards ranked fifth.

“Everybody wants a piece of the pie,” said Pierce, who last year tied for sixth on Vanderbilt with 14 receptions yet averaged a team-best 17.5 yards per catch. “We have a team-first mentality. I believe my value is going to show regardless.”

“The numbers don’t really tell everything,” he said.

He is on track to graduate in May. With aspirations to play in the National Football League, he will train during the spring semester to increase his professional opportunities.

“I’m always looking to the future,” he said. “I definitely think the best is ahead.”

A judge dismissed all charges against state Sen. L. Louise Lucas on Monday. Portsmouth Police had charged the senator with... read more