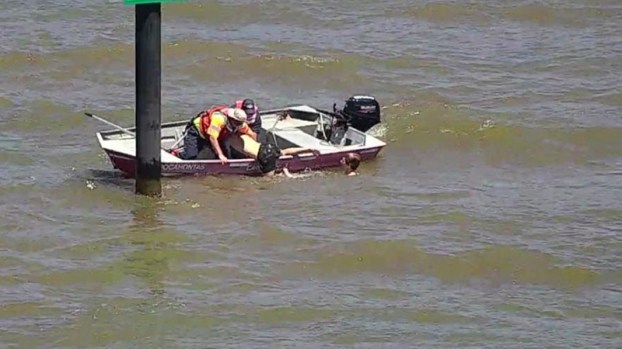 Jamestown-Scotland Ferry crew members Greg Crocker and Wayne Harper rescue distressed people from the water in the summer of 2019. Croker, Harper and seven others were recently honored by VDOT for rescuing three people from the James River.

A radio call between crew members of the Jamestown-Scotland Ferry changed the lives of 12 people.

Nine of the 12 were working aboard the ferry or on the Jamestown side of the boat landing on the afternoon of June 14, 2019. Capt. Edward Brooks was at the wheel and made a radio call. Someone was in the water and they seemed to be in trouble.

“[Brooks] told me to stand by — that there looked to be a swimmer in the water that looked to be struggling,” deckhand Nathan Bradley said. “As soon as we touched the pad and lowered the ramp, he told me to grab a ring and go.” Bradley ran down the dock toward the swimmer, a teen girl, who was upriver from the ferry pier.

“When I got to her she was very tired,” Bradley said. “I told her that I’m going to throw her a life ring and she said ‘Please’ and I just tossed it down there.”

Around the same time, Capt. Reggie Kirton was approaching the pier as he prepared to start his work day. Kirton quickly jumped into action. Together, they pulled the swimmer into shallow water.

Another radio call went out. Two more people were in trouble in the water nearby.

“I had run off the boat because I saw Nate running off with a life ring and knew something was up,” said crew member Wayne Harper. “Then the captain called and said he was going to launch a boat so I ran back in and we already had [crew member Greg] Crocker who was the oiler, who was headed for the boat and we started to prepare it, put the plug in and it worked out very well. Everybody knew what to do. We’re trained for it. Everybody was on time, they all were in their positions and we realized how that it was an emergency and time was of the essence.”

In less than 10 minutes, the rescue was over.

For their quick, professional response, Brooks, Bradley, Kirton, Crocker, Harper and four others were honored by the Virginia Department of Transportation with the 2020 Commissioner’s Award for Life-Saving Response for rescuing the three teenagers from the river. Bradley and Harper have been with VDOT for about five years. Also honored were Joe Kisilywicz, Tamara Montelo, Hugh Payne and Al Stokes, who has been with VDOT as a maintenance technician for nearly 15 years.

The award is presented annually as the transportation agency’s highest form of recognition for accomplishments that are above and beyond the usual expectations for employees. The heroism category focuses on providing emergency assistance and courageous actions under difficult and challenging conditions.

After it was all over that day, “I think everybody looked at one another and was glad that it turned out the way it turned out,” Harper said. “That was the major thing. Nobody suffered permanent damage, nobody was hurt. Everybody worked as a team and it went incredibly smoothly and with a great outcome.”

VDOT operates the 24/7 ferry service between Scotland, in Surry County, and Jamestown. The ferry is typically staffed by six people — three deckhands, an oiler, an engineer, and the captain who drives the boat.

“It’s not a common act to put others before ourselves,” Christopher G. Hall, VDOT’s District Engineer for Hampton Roads, said in a statement recognizing the crew members. “But our ferry crew did just that to save three swimmers. They had the proper training and made the selfless decision to help save another life, allowing these teenagers to return home to their families. They are heroes.”

Harper said last year’s experience has prompted him to be even more vigilant to what’s going on in and around the water. Especially in the summer, people are usually out on the river and “I think we’re just more aware now of how dangerous it can be for people swimming out there.”

Bradley, who served in the Navy and has also worked as a first responder in Colonial Williamsburg, said the ferry crew trains regularly by rescuing a mannequin from the water, but last summer was the first time he was involved in a real-life water rescue.

Harper is also a military veteran and between the Navy, a job at the shipyard in Newport News and now the ferry, “I have never worked anywhere but the water. I was lucky to get this job and I appreciate it very much.” And, he added, “the view is always nice.”

Isle of Wight’s Board of Supervisors voted 4-1 on Nov. 19 to approve changes to the proffered conditions and master... read more