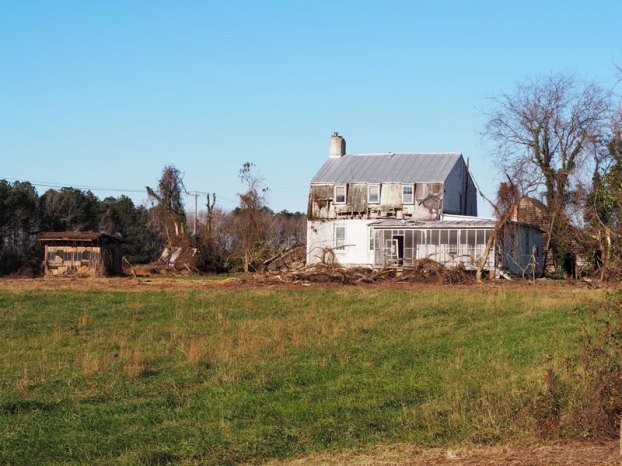 Smithfield’s Town Council voted 6-1 on Dec. 1 to approve Mary Delk Crocker’s request to demolish the dilapidated 1730s-era Dutch Colonial farmhouse at 502 Grace St. known as Pierceville — despite the fact that she’s no longer the legal owner of the property.

Crocker deeded the historic home to LSMP LLC — a company owned by former Smithfield Foods chairman Joseph W. Luter III — on Nov. 9. But according to Town Attorney William H. Riddick III, who’s been representing Luter in his efforts to acquire Pierceville and the former Little’s supermarket on Main Street, the change in ownership is irrelevant.

“Our town ordinance provides ‘owner or applicant,’” Riddick said. “She is still the applicant.”

The ordinance to which Riddick refers is Article 3.M of the zoning ordinance governing the town’s historic preservation overlay district. This outlines three conditions that must be met for demolition by right of a landmark building or structure such as Pierceville: the owner or applicant must apply to the Town Council for such right; try for at least one year to sell said property; and execute no contracts to sell said property during that time. By virtue of just over a year having elapsed between the Town Council’s previous vote to deny Crocker’s request in mid-2019 and the deeding of the property to Luter in November, “She satisfies all those conditions,” Riddick said.

In fact, the town has been court-ordered to reconsider Crocker’s request, he added. Crocker had filed a lawsuit against the town in August 2019 seeking to overturn the town’s denial of her request. Riddick and outside counsel John A. Conrad had defended the town in that suit, which was still pending in September this year when Riddick began representing Luter in his efforts to acquire Pierceville and Little’s — though oral arguments had concluded by this time, and all that remained was for the judge to issue a decision. That occurred Nov. 12 — the same day Pierceville’s transfer of ownership was recorded in Isle of Wight Circuit Court — with Judge Robert Sandwich dismissing Crocker’s case, but remanding the matter back to Town Council.

During citizens’ time, the council received comments from three town residents in opposition to the demolition of Pierceville, plus a letter from Mark Gay, executive director of Preserve Smithfield – a nonprofit formed from public outcry in 2015 over a developer’s plans to build 151 single-family homes on the Pierceville property. Dick Grice, who represents Smithfield on Isle of Wight’s Board of Supervisors, spoke in favor of tearing Pierceville down, claiming that doing so would “open up the entrance” to the town.

Gay’s letter, which Town Clerk Leslie King read into the record, argued that, contrary to Riddick’s interpretation, Crocker “no longer has legal standing to request the razing of Pierceville,” by virtue of her having sold the property to Luter, and that Luter should petition the town himself if he wished to demolish the house. Gay further claimed that, “On Monday, Nov. 30, Mr. Luter communicated through a responsible third party that he is not opposed to the preservation of the Thomas Pierce home,” just unwilling to foot the cost of restoration.

But Gay wasn’t the only one to make comments in writing that evening. Joseph Luter IV, son of the former Smithfield Foods chairman, wrote on behalf of his father that the senior Luter’s goal in buying Pierceville and Little’s was to “improve the gateway” to the west end of Smithfield and that “critical to the success of revitalizing this part of Smithfield is the demolition of the Crocker house and outlying barns.”

“We have examined them and determined they cannot be salvaged or renovated; they are beyond repair,” Luter IV wrote.

In both properties’ place, Luter envisions “a high quality development” including office space, multi-family housing “for all income levels,” a “small boutique hotel,” townhouses, single-family homes, assisted-living accommodations and potentially, a walking trail built in conjunction with the Smithfield YMCA.

According to Riddick, Luter need not submit his own demolition request to the Town Council, since Crocker’s, by virtue of having been remanded to the council for reconsideration, was “still pending” that evening.

“I voted against this last time … I hate to do this but a decision has to be made,” said Vice Mayor Michael Smith, who called his vote in favor of demolition this time a “realistic” one.

Editor’s note: A previously published version of this story incorrectly stated there were only three citizens’ time speakers, all in opposition to demolition.