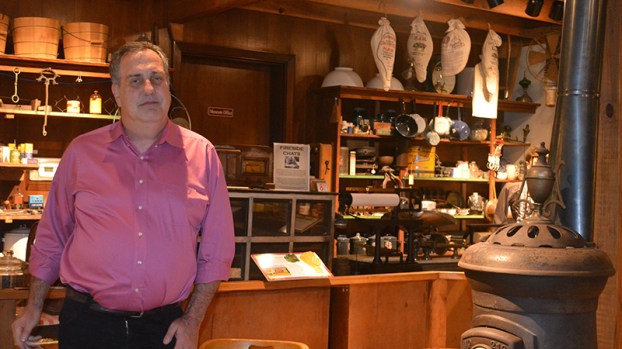 Mike Holtzclaw loves history, connecting with people and telling a good story. He still gets to do all of it at the Isle of Wight County Museum. (Jen Jaqua photo)

Telling the story of Isle of Wight

In his new role as curator at the Isle of Wight County Museum, he gets to enjoy all three.

If his name sounds familiar, it’s probably because you’ve read one of his stories. Holtzclaw was a journalist for nearly 30 years at The Daily Press in Newport News. He focused on entertainment but also spent years writing feature stories and sports, along with whatever else landed on his desk during his decades at the newspaper.

A St. Louis native, Cardinals fan and self-described “baseball freak,” Holtzclaw left the paper in February under a buyout and joined the museum staff in August. His old and new jobs align more closely than people might realize, because storytelling is at the heart of meaningful experiences.

“I love having a good story to tell, and that’s what a curator does at a museum,” he said. “You’re given history and you’re given these stories to put in context and to tell people.”

Through his time at The Daily Press, Holtzclaw had made plenty of contacts and connected with plenty of people throughout the region, including museum director Jennifer England. He’d also volunteered at the museum. So when the job opportunity arose, “I ran at it,” Holtzclaw said. “I love history, and you’re just surrounded by it here. It’s very exciting to me.”

Some people say every town deserves a newspaper or another institution of public civic pride. Holtzclaw feels that way about museums. “I think every town and every community should have a museum like this to tell its story because every place has a unique story, especially one that goes back as many years as Isle of Wight County does, and Smithfield. There’s a unique story here, and it’s wonderful to have a place that can tell that story fully.”

Holtzclaw is “fitting in very well” with the team and always ready for something new, said England. “A lot of the skillset is the same — the reading, the researching, the writing. A big component of the job is being able to dig up primary source documents.” With research and writing being such a big component of his career, “we thought this would be a good transition and would be able to fit the needs of the position.”

As the director, England is in charge of the museum’s overall vision, direction, promotion and public relations. Holtzclaw, as curator, is the person in charge of the physical space and how it’s taken care of and being presented and interpreted. But as a small museum, “the reality is we’re both in charge of everything from cleaning up messes to editing didactic panels,” England said.

Although some people might view a museum as a place that personifies the opposite of urgency, “there’s a lot going on in our museum world,” England said. “We have a lot of projects. There’s a lot of things up in the air and I wish they could all be done right now. There’s certainly that same sense of pressure, but it’s very different from a newsroom.”

“I knew there’d be a bit of a learning curve about how to preserve artifacts and how to preserve history and it’s a perfect landing spot for me,” Holtzclaw said. He’s also been working hard to absorb as much information as possible about Isle of Wight history.

“I always tell younger people we’re born with all this curiosity and imagination in us because we don’t know anything, so we have to ask. And a lot of people grow out of that. I don’t ever want to grow out of that. I’m always wanting to learn stuff,” Holtzclaw said.

In an era when you can see and experience almost anything virtually, once you get someone in the door, making a personal connection will keep them engaged. “I think if you can get people to do that to relate [history] to their own experience it opens things up to them,” he said. “It’s no longer someone talking to me.” With that connection, people will begin “to understand what it was like to experience this.”

On one recent day, a mom and her two kids came in before closing time — a third-grade daughter and kindergarten son. “They were asking questions, and I said, ‘Let me point a couple of things out.’ And what I noticed is the kids and the little girl in particular — they were so interested in everything,” he said.

The girl was asking good questions and paying attention. “Right there, just spending a few minutes pointing things out and having young kids who were engaged and wanted to know more and were asking really good questions and making observations, you feel like right there, we made a difference. You get kids interested in this, you pique their curiosity. You’re making a difference. That’s exciting to me.”

Holtzclaw’s enthusiasm for his new role is clearly palpable and genuine. At age 57, and by his own telling, “I’m at a great stage where I’m young enough to do this, to start something new. But I’m also old enough to appreciate it.”

And although he stepped away from the newspaper, don’t be surprised if you see his name and stories pop up somewhere else. “I’ll always be writing,” he said. I don’t know that I’ll have bylines in the paper anytime soon, but writing is just what I do. I write for my own entertainment. If I get an idea in my head that I want to write, even if it never sees the light of day, I’m going to write it to get it out of my system.”

When he’s not relishing his new role, you might also find him on stage, honing a stand-up comedy routine at a local club. He’s even appeared in a charity event at Cozzy’s in Newport News. It was billed as a celebrity comedy showcase. He came in second place out of eight people and won $250 for the Peninsula SPCA.