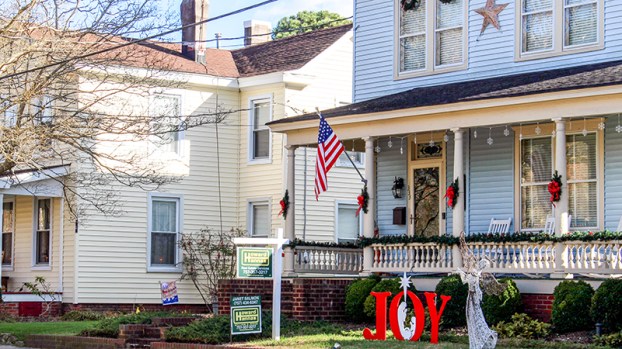 This home on Grace Street in Smithfield was among many local listings. Local realtors say the market for homes is strong despite COVID-19 and that sellers have a bit of an advantage due to limited inventory.

As we turn the page into 2021, there’s some good news for real estate — home prices are up.

If you’re ready to sell, you might have more equity in your home than you realize. And with many people forced into a new COVID-19 normal where homes are now workplaces and schools all rolled into one, the brisk market is resulting in fewer listings.

All these trends are likely to continue into 2021, according to local and statewide industry professionals.

“We’ve just seen the market go up tremendously due to the lack of inventory,” said Leslie Moore, who is managing broker of Howard Hanna’s Smithfield and Peninsula offices. “Interest rates are very low right now so that makes it a great time for everybody. It’s a great time for sellers to sell — they can sell their house quickly — they’re not sitting on the market. You see them go under contract very quickly, sometimes with multiple offers.”

Moore said there’s so much turnover that some buyers are writing escalation clauses into their offers — that’s where a buyer puts in writing that they’re willing to automatically increase their offer by a set amount.

With just days left in 2020, “in general, like in the rest of the state, home sales activity has been strong in the Isle of Wight and Hampton Roads markets,” said Dr. Lisa Sturtevant, the chief economist for Virginia Realtors, a statewide industry association. “Inventory — or the supply of homes available for sale — remains the biggest constraint on the market,” she said.

Isle of Wight’s number of home sales was up 54.2% in November compared to the same time in 2019, while sales were up nearly 21% in the broader Hampton Roads region. Home prices increased by double digits for several months, resulting in a median sales price of $329,950, which is up 14.2% from last year. Sturtevant said the median home price in Hampton Roads was up 13.9%.

Although unemployment and economic upheaval have affected many people, “so far, unemployment has hit hardest those employed in the restaurant, bar, hotel and retail sectors. In general, workers in these sectors tend to be more likely to be renters, rather than homeowners,” Sturtevant said. “This is one reason the for-sale market has been so resilient — working households that want to be homeowners tend to be in jobs that have been relatively insulated during the downturn.”

The first is a result of the coronavirus pandemic — fewer homes are being made available for sale, thus the supply is low. Second is an influx of new residents to Isle of Wight from elsewhere in Hampton Roads. “We expect to see this trend continue and likely increase.”

However, Hines continued, incoming residents are often surprised by the cost of homes in Isle of Wight.

“Good-quality, single family residential homes for $250,000 and under are almost non-existent due to price increases,” she said. “Typically, this pricing level is for attached townhomes. When low-cost homes are available, they sell very quickly,” Hines said.

Finally, there’s a “huge demand” by developers for the construction of new homes in new neighborhoods. Hines described Isle of Wight as a “very attractive” place to live and said developers see the area as “one of the last available open land areas for building homes in all of Tidewater.”

Smithfield’s Howard Hanna office closed 247 transactions just before Christmas and expected to close about 260 transactions before the end of the year, which would equate to about $73 million in sales volume. By comparison, in 2019, the office closed 198 transactions valued at about $45 million. Moore gave the caveat that 2020 included a few unusually large deals.

But buyers may gain some advantages in the new year.

“With inventory levels still low, a seller’s market will continue,” said Cindy Hawks White, the outgoing chairwoman of the Hampton Roads Realtors Association. “However, should the stay be lifted and foreclosure proceedings commence, we may see a shift in the market depending on how many and how quickly the foreclosures come on the market for resale.”

“There are several scenarios in play with buyers especially during the end of the year and after the holidays,” Hawks White continued. “Typically, January brings new listings, and many buyers wait until this time to buy. Additionally, there is some speculation that there may be a large increase in short sales and foreclosures on the horizon, resulting in a bump in the inventory. If this comes to pass, it will give buyers an edge, especially in a shift from a seller’s market to a buyer’s market.”

According to an analysis of residential home sales in Isle of Wight through Dec. 23, Hines said annual home sales in the county rose 14.2% from 649 to 741 in 2020. Available inventory is down with about two months of inventory available, down from three and a half months, a reduction of about 35%. The number of active, available homes is down from 2019 — there were 192 last December versus 144 this month, a decrease of about 25%.

“Demand is the highest we have seen in the past decade,” said Hines.

Moore said she’s seeing a trend where sellers are not paying buyers’ closing costs as often. And with people continuing to work or do school at home, Moore said as many people re-evaluate their living situation they are “right sizing” to get into a home size and layout that works for them and their family.

“Right now, there’s a serious lack of inventory out there, and I think people don’t necessarily know how much equity we have in their house,” Moore said. “That’s one of the reasons we offer a free [comparative market analysis] to people so that we can give them a market analysis because a lot of times they have equity that they don’t realize.”

The annual wreath-laying event at the Albert G. Horton Jr. Memorial Veterans Cemetery in Suffolk was considerably smaller than in... read more