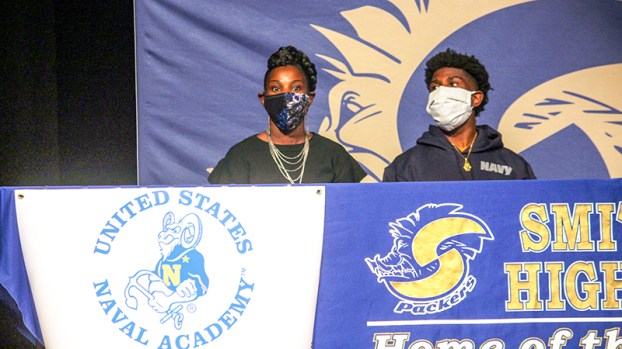 Smithfield High student Chris Gundy, right, and his mom Tynesia Gundy, listen to remarks during a Dec. 16 ceremony where he signed on to play football at the Naval Academy.

Gundy’s athletic talent and academic achievement have earned him a football scholarship to Annapolis. A small group of family and friends joined him in the school’s auditorium and by video online on Dec. 16 — early signing day — to celebrate his accomplishment.

“I’m grateful for the opportunity that I have knowing that COVID could have easily stopped what I had planned,” Chris said.

Due to seasons being curtailed or canceled due to COVID-19, many college seniors are being offered an additional season of athletic eligibility, “so scholarships are even harder to come by,” said Matthew Moore, Smithfield’s director of student activities, who served as the host of the brief ceremony.

“The Naval Academy is one of the hardest institutions in the county to get into,” Moore said. “Chris is a culmination of an outstanding student. He’s good in the classroom, his leadership abilities are unmatched, and yes he’s got a lot of natural athletic ability but his workmanship is one of the best we’ve seen here as a while.”

“When COVID hit in March, undeterred by an international pandemic, Chris continued to work, and work and work,” Moore said. “And all of his efforts culminated to where we are today, which is the securing of an athletic scholarship in the sport he loves — football.”

DeVondre Bazemore is in his first season as Smithfield’s head coach — he was previously assistant.

“When I first got here a couple of years ago, from the day that I stepped in here, Chris was always an easy kid to coach,” Bazemore said. “He covered every base in the classroom. Everything you wanted on the field. Crazy athleticism.”

The 5-foot-9-inch standout’s on-field talent is so stellar, Bazemore said he is capable of playing nearly any position on the squad. “You’ll see him mostly in the back field — running back and slot receiver and he’s a return specialist.”

“Early on,” Moore said, “people said he was undersized. They said he wasn’t tall enough, he wasn’t big enough. And he basically was like ‘Watch.’” And despite the pandemic, Bazemore said, “you’d still see Chris outside everyday” practicing and running drills.

In addition to taking care of academics, maintaining a 3.6 GPA and maintaining his athleticism, Bazemore said he was touched that Chris would also check up on his teammates and coaches. It’s evident, Bazemore said, that Chris cares all around about the people in his life. “That stood out to me so much more than anything else because it shows who Chris is as a person,” Bazemore said.

Moore shouted out Chris’s parents, who in turn praised his teachers and mentors in and out of school.

Chris’s mom, Tynesia Gundy, quipped that her son “has so many last names” because so many members of the community have served as mentors and extensions of the family. “We’re extremely proud of you. We thank God for you, we thank God for giving you this opportunity,” she said at the podium with her husband Christopher.

The Midshipmen are part of the NCAA Division I FBS, which is composed of top tier college teams, including Notre Dame, the Clemson Tigers, Duke, the Air Force Academy and the Army’s Black Knights at West Point, the Midshipmen’s regular rivals in the well known and long standing Army-Navy game.

Bazemore acknowledged working through COVID-19 has made for a challenging season.

“It’s easy to complain but we won’t,” Bazemore said. “We’re doing everything we can — Zoom meetings, coaches’ meetings. I know our athletes have stayed engaged in working out alone or with other guys. So we’re going to trust that those guys are going to get better and we’ll return when it’s time.”