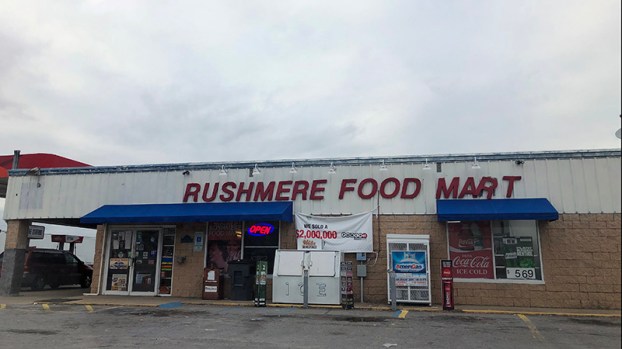 A $2 million Powerball ticket purchased for an August drawing at the Rushmere Food Mart still has not been claimed. (Nate Delesline III photo)

Check your pockets, around the house and in your car. It might be worth $2 million.

A winning Powerball ticket sold this summer in Isle of Wight County is still unclaimed.

Time is running out to claim the prize, as the lottery allows 180 days from the date of the drawing to come forward. No one had done so as of Dec. 30, according to John Hagerty, a Virginia Lottery spokesman.

The winning ticket was sold Aug. 19 at Rushmere Station Food Mart, at 4761 Old Stage Highway in Smithfield. The winning numbers for that Powerball drawing were 13-23-47-55-58, and the Powerball number was 23.

Lottery officials said the winning ticket matched the first five numbers and missed only the Powerball number. Normally that would mean a second-prize win. But whoever bought the ticket spent an extra dollar for a Power Play, doubling the prize to $2 million.

Gregory Jones, an employee at the store, said he doesn’t know who may hold the winning ticket. He added that “lottery is probably our biggest seller here.” The store is located in northern Isle of Wight County near the Surry County line.

Normally, the 180-day deadline would be Feb. 14. However, since that date falls on a Sunday, when lottery offices are closed and the following day, Feb. 15, is a holiday — President’s Day — Hagerty said the winner will have until 5 p.m. Tuesday, Feb. 16.

Hagerty said in August that large prizes are sometimes not claimed immediately, even if the person knows they’ve won. He also said officials “have no way of knowing who has that ticket until they walk through the door.” Whoever has the ticket should immediately sign the back to establish ownership.

Powerball tickets are sold in 45 states, the District of Columbia, Puerto Rico and the U.S. Virgin Islands.

Bauman holds down midfield for Randolph-Macon

By Barbara Boxleitner Maddie Bauman has become a constant in the midfield for the Randolph-Macon College women’s soccer team. The... read more