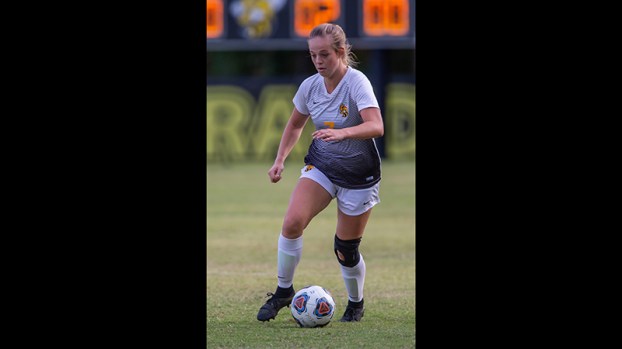 Bauman holds down midfield for Randolph-Macon

Maddie Bauman has become a constant in the midfield for the Randolph-Macon College women’s soccer team.

The Smithfield High School graduate recovered from a season-ending injury her freshman season to start 16 of the 22 games she played last year. Second among the sophomores in starts, she finished with three goals and three assists.

“She’s really focused on her health, her fitness and mobility,” he said. “She’s able to cover a lot of ground and play at a high level of intensity for a very long time.”

Her presence in the lineup last year was a boost for her and the team (21-1-1) after she said she dislocated her left kneecap as a freshman, limiting her to six games.

“I was trying to defend on the sideline,” she said. “I stuck my left foot out to try to plant. She (the opponent) kind of ran into me. My kneecap popped out of place.”

Even without requiring surgery, she was sidelined for six months and received extensive physical therapy. “It took a while to even bend my knee again. I lost muscle mass,” she said.

She has played with a small brace on the leg to prevent reinjury. “At first it took me a long time to plant (her leg) normally and to pass normally,” she said. “I would have pain after games.”

Bauman recovered and became a secondary scorer, finishing third among the midfielders with nine points, one behind two upperclassmen. She shot 29 times and had a .345 shots on goal percentage.

“I kind of surprised myself,” she said. “I want to keep getting better and keep excelling.”

She wants to build her, and the team’s, offensive production for when the season is scheduled to begin in February. “I want to get more points on the board,” she said. “I have a good eye for the field. My strong suit is seeing the field and seeing passes.”

When she attacks from the left, she is able to cut in to the right and shoot or pass with her right foot. “She’s very creative,” Howell said. “She’s very confident on the ball. She’s good with her distribution. She’s got a very, very good strike on the ball.”

Defensively, she is strong too, according to the coach. “As we move forward,” he said, “I can see Maddie moving to a more central defensive midfielder role.”

Send updates about area athletes to Barbara Boxleitner at jdanddoc@gmail.com.

As we turn the page into 2021, there’s some good news for real estate — home prices are up. If... read more