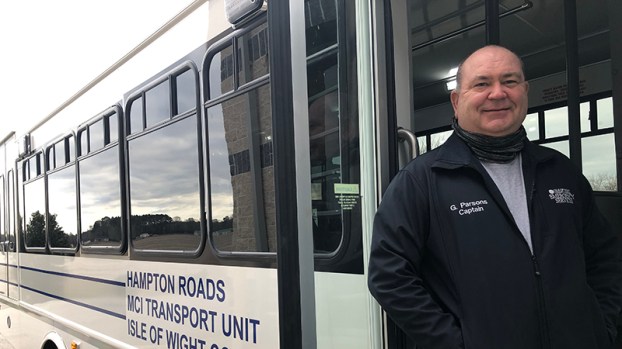 Greg Parsons, a captain with Isle of Wight County Emergency Services, stands at the front passenger door of the county’s recently delivered mass casualty incident bus. The vehicle is deployed in advance of or in response to events where a large public safety response is needed.

Isle of Wight County has a new tool available to support local and regional public safety.

The county recently took delivery of a new mass casualty incident bus. The specialized vehicle, which is purpose-built on a 2019 Ford F-550 truck chassis, is designed to transport nine people on stretchers, two people in wheelchairs and 10 seated patients, according to information from the county.

Although the vehicle, called the MCI bus for short by public safety staff, cost about $125,000, the county got it for free, with no matching funding required, through the Hampton Roads Metropolitan Medical Response System. The regional organization was established in 1999 under the Hampton Roads Planning District Commission.

Capt. Greg Parsons with Isle of Wight’s Department of Emergency Services said the new vehicle replaces a converted school bus that was used for the same purpose. The county has had the new vehicle for about a month.

“It’s designed to give us a place to treat multiple patients at one time,” Parsons said. “And that treatment may be that they come here and then they’re taken to an ambulance for transportation later.” In the event a large number of people need medical attention, “not all of them are going to be transported to a facility, so they can be evaluated, some can be treated here and released, some may be treated and transported,” Parsons said.

In addition, Parsons said the vehicle can also be deployed in advance of large events as an additional resource to maintain everyone’s health and safety — being available for first responders and members of the public to step into as a place to cool off if they are overcome by the heat during a community event on a summer day, for example.

Parsons clarified that the vehicle is not set up to function as an ambulance. There’s no defibrillator or stocked medicine cabinet regularly kept on board. “When you’re dealing with an ambulance, you have room for one patient, primarily. This just gives us some more room and the flexibility to deal with multiple patients,” Parsons said.

Through the regional partnership, the bus allows Isle of Wight to “supplement the other jurisdictions if there were to be a mass casualty event where they would need mutual aid.” The Hampton Roads Metropolitan Medical Response System includes 17 jurisdictions, covers 2,900 square miles and has a population of 1.7 million — essentially every community in the region. Between 1999 and 2014, the region received nearly $10 million in federal grants to develop and support regional public safety cooperation and training initiatives, according to the organization’s website.

Isle of Wight has 83 full-time and part-time staff supported by approximately 300 volunteer fire and emergency medical service responders, according to Pat Humphries, the county’s chief of emergency services.

In the spirit of mutual regional cooperation, Isle of Wight’s old mass casualty vehicle will stay in service.

“The old MCI bus will be going to Surry County Emergency Management,” Humphries said. “This will be an asset that Isle of Wight can still use as a mutual aid request as needed.”