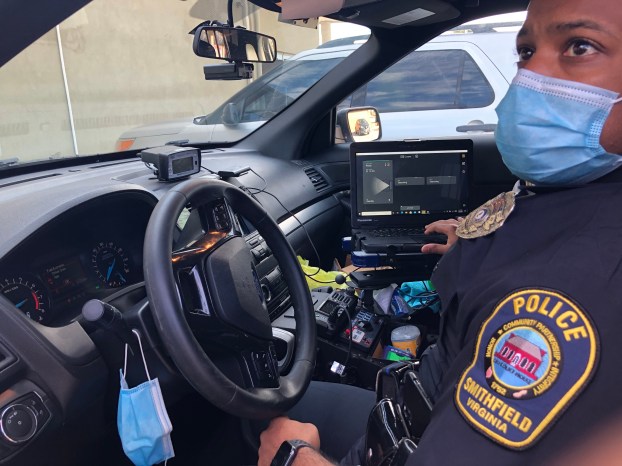 Smithfield Police Department Officer Anthony Cooper demonstrates some of the video technology used by patrol officers. The department is in the process of upgrading its video technology. With the new technology, when officers activate the emergency lights, the in car camera and body worn camera will automatically turn on. Photos by Nate Delesline III

Cameras are an integral part of modern law enforcement and public safety.That’s why Smithfield’s Police Department is pursuing technology upgrades. Over the next few years, the town plans to equip all patrol vehicles with a system that will digitally link in-car cameras and body cameras.

Deputy Chief Chris Meier said all of the department’s patrol vehicles currently have cameras, but the upgraded system will hopefully further enhance safety, trust and accountability between officers and the community.

Here’s how the new system works: when an officer turns on the emergency lights, the system automatically activates the in-car camera and the officer’s body camera. The body camera of any other officer who is within about 30 feet of the activation will also start recording.

The system also connects with the officer’s tasers. When the weapon is turned on, the cameras activate.

Adding four in-car camera systems to the town’s existing contract with Axon, which makes devices and software apps for public safety, will cost $31,635 over the next three years. Town council approved the move at its Jan. 5 meeting.

“When I started, there was still VHS [tapes]. We had to change the VHS out,” Meier said. Then technology evolved to CDs, then hard drives. Now the latest generation of camera technology is internet cloud-based.

“There’s always something that happens before we turn the blue lights on,” Meier said.

Additionally, the software also allows officials to cut a long clip down to a shorter clip and blur out people’s faces for their privacy and safety. This is useful, Meier explained, if a major incident happens and the video is about to be released, but there are bystanders in the recording who aren’t directly involved.

The system is connected to a router and SIM card, which automatically sends video clips to the cloud. Finally, for further accountability, the system also automatically stamps the digital file with a tracking history showing who watched the video and when.

And since the system is cloud-based, videos can easily be shared with prosecutors or other public safety agencies, eliminating the need to make physical copies.

Officer Anthony Cooper, who demonstrated some of the system’s features for The Smithfield Times, said the system inspires more confidence for him when he’s on the job.

“What I like about it is I was just talking to Officer [Donna] Hughes. I did a traffic stop earlier and when I initiated the traffic stop, obviously my camera came on and her camera came on as well even though she was driving past. So everybody’s body camera comes on.”

On every traffic stop, “everything is in sync when I walk up to the door,” Cooper said.