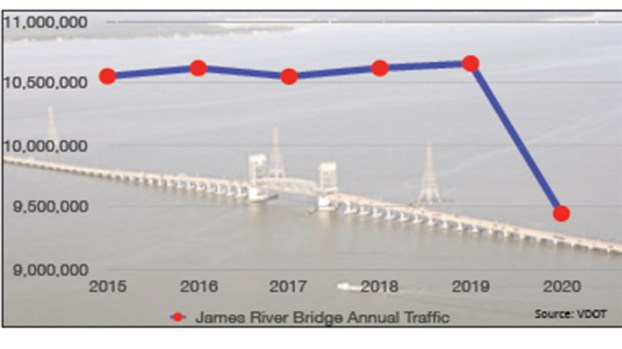 If you thought James River Bridge traffic seemed lighter last year, your perceptions were on target.

“After falling about 30% at the beginning of the quarantine, traffic has balanced out at about 90% of 2019 volumes,” said VDOT spokeswoman Nina Ullrich. Data also shows that JRB traffic spiked in July and December due to Independence Day, Christmas and New Year’s falling on a different day of the week than the previous year. Ullrich said bridge traffic also spiked on the weekends of Oct. 6 and Oct. 13 when the Monitor-Merrimac Memorial Bridge-Tunnel was closed for paving work.

It’s probably no surprise, but commuting habits and traffic volume is yet another experience that the coronavirus pandemic has affected, as many people were forced to or chose to do work and school at home. However as people adapted to the new normal, traffic has crept back. The rollout of the COVID-19 vaccines may accelerate that trend.

“People aren’t travelling, they’re not doing day trips, they’re not doing as many driving vacations or flying — generally people are staying home and staying safe and that’s a good thing to see,” said Holly Dalby, who is director of public affairs and marketing for AAA Tidewater Virginia in Virginia Beach.

Although Dalby didn’t have analytical data about pandemic-related traffic trends, “anecdotally, I can say just driving to work myself here on the Southside, I’ve noticed more traffic in the last month, and it seems as though people may be going back to work and some schools are starting up again. So that just normally will put more people on the road particularly during those normal drive times.”

Dalby said it’s a few weeks too early to draw any insights into how the pandemic, rising gas prices and the paradigm shift of work from home and school at home might affect the typically busy summer travel season.

“I think it will depend on how quickly people get vaccinated and how comfortable they are in venturing out after that.” Later this month, Dalby said AAA’s national office planned to share more summer travel analyses and predictions with the organization’s region-level leaders.

Dalby said the decision to travel — especially for fun rather than school or work — is a subjective one.

“I might feel safe, you might feel safe, my neighbor might not. It’s just such a personal decision,” she said. “We just at AAA would simply encourage people to practice safety for themselves and for others to wear their mask, practice social distancing, carry hand sanitizer and just be cautious.”

If you do hit the road, AAA says be prepared for higher gas prices.

Prices at the pump will probably keep rising, due in part “to expensive crude oil and the market’s growing optimism that demand will increase amid the vaccination rollout,” Dalby said in a recent news release.

“Consumers can expect to continue paying more to fill up this month, potentially up to 10 cents more a gallon, depending on how high crude goes,” said Dalby. “If demand grows, that will further fuel pump price increases.” As of Feb. 8, average gas prices were $2.29 per gallon in Hampton Roads, $2.33 statewide and $2.46 nationally.

The James River Bridge has linked Isle of Wight County and Newport News since 1928. The current 4 ½ mile long structure opened in 1982. It carries four lanes of divided traffic — two in each direction — and includes a vertical lift span that allows marine traffic to pass underneath. It’s also Virginia’s longest state-maintained bridge, according to VDOT. It is one of several major Hampton Roads bridges or tunnels that are currently toll free.

Although there are no construction projects planned at the James River Bridge at this time, Ullrich said VDOT began a Strategically Targeted Affordable Roadway Solutions study in 2019 to assess potential safety and operational improvements for about 2 ½ miles of Carrollton Boulevard between Channel Way/Deep Bottom Drive and the bridge.

The improvements under consideration include improved traffic signal and timing, modification to existing lane configurations, pedestrian and bicycle access through the corridor and implementing non traditional intersection designs such as a roundabout. These types of improvements can be implemented relatively quickly at a lower cost.

Two projects are also in the planning stage that are intended to improve bridge corridor traffic flow. The first is reconstructing the intersection of Carrollton Boulevard and Brewers Neck Road to add traffic capacity. The second is the Nike Park Road extension project. It’s still in the design phase. If it comes to fruition, it would be a one-mile-long, two-lane connector road from Nike Park Road and Reynolds Drive to Carrollton Boulevard that would also serve as a multi-use path.

Ullrich said VDOT is also working on a road safety audit at the River Road and Mercury Boulevard Intersection in Newport News through the Virginia Local Technical Assistance Program in collaboration with the Safety Circuit Rider Program, which is part of the Center for Transportation Studies at the University of Virginia.

Smithfield’s LOVEwork statue has a new home. The art installation and photo backdrop is now located in front of The... read more