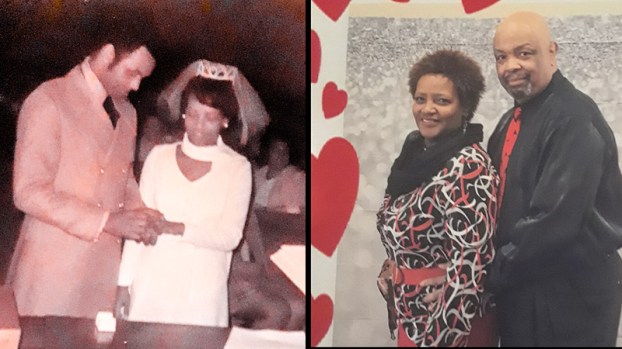 It’s where the Isle of Wight natives met and shared their first kiss. They’ll be back this month to commemorate the school’s connection to their love story for their 50th wedding anniversary during a small, socially distanced celebration Feb. 27.

Back in the late 1960s, the building was known as Westside High. Like many other schools, it was segregated. The Black kids went there, and the white kids went elsewhere. In spite of that, it was still a place of laughter, athletic achievement and scholastic success.

“I remember going to classes. When I got to eighth grade, I probably went to about six classes a day. I walked home,” said James. He was also an athlete. He played basketball but sprained his ankle and he had to sit out the rest of the season. He also recalled playing football but having his mother pull him off the team when his grades were bad.

“The coaches told me I would have been a pretty good athlete,” he said.

Claudia lived in the country and rode the bus. “And the bus experience was really a good experience because you met all your friends and the bus family became like a family.”

Claudia also recalled that school desegregation was starting to directly affect students in 1968. “Some of my classmates, we were in our last year as seniors and some of my classmates elected to go over [to the former all-white school]. It was a voluntary thing.”

It was with that backdrop that they first met at a Westside High talent show one evening.

“I was sitting in the audience, and she was seated behind me with her sister and their friends and I looked around and saw her,” James said. “I thought ‘She’s a nice looking girl.’ So we started talking. I got a little bold and started talking.”

“He was right chatty that first day we met at the talent show,” she said. “And I was like a shy person. I would talk one on one with somebody but I just never could talk out in the open. But I just liked the way he was talking and we were going back and forth.”

But James’ confidence seemed to fade the next day.

“I lost my confidence,” James admitted. But things didn’t stay frosty for long. Soon after, James was at an evening basketball practice when the coach told the team to jog around the building three times.

“The last time around, I saw her come out of the building,” James said. “The only girl that came out that door that evening. And I ran by her and I stopped. And I said ‘Are you going home’ or something like that. And we started talking again. I walked up to her and asked ‘Can I get a kiss?’ From there, that’s where it went.”

Not everyone makes it to such a marriage milestone. Claudia credits their faith as a contributing factor.

“It was the grace of God,” she said. And she added, it’s a lot of other things too. “It’s the choices that we make in life.” Over the last 50 years, every moment “was not pretty. We went through the good, the bad and the ugly and we’ve still got the best yet to come. We have been through some stuff and we’re still here.”

James emphasized empathy and respect as essential elements of staying together. “I remember an old man telling me ‘Why hurt someone you love?’ You’ve got to have some compassion toward them.”

Her advice for other couples? Be mindful of your choices and the consequences of your decisions. But also, when hard times come, “stick it out. It’s not always going to be that way. Things are apt to change.”

A change of pace and place came early in their relationship. Back in the late 1960s, many people left Smithfield for work if they couldn’t get or didn’t want a job at the company known today as Smithfield Foods or one of the region’s many shipyards. A job in Washington caught her eye.

Claudia and her sister “saw this ad in the paper — it had to be The Smithfield Times because that was the only paper we knew at the time — and the ad said the FBI was looking to hire people,” she said. “We thought this was the biggest joke.” They applied anyway.

A month later, an FBI agent came to Smithfield to interview their family, friends and neighbors. And a short time later, they received official paperwork that they were hired and should report to Washington on April 28, 1969 to start their new jobs.

“We didn’t take it seriously but they did,” Claudia said. “So that’s how my sister and I got started.” They went to the former bus station at the corner of Main and Church streets and left on a Trailways bus.

They married on Feb. 27, 1971, in the District of Columbia. After a lifetime of small town living, D.C. was a big change. “But it only took a good month for us to get settled in and after that, we never looked back.” Their son, Rodney Tynes, was born in 1973.

Claudia left the FBI for a job with the General Services Administration and eventually became a management analyst before retiring in 1994. James got a job with Safeway, then joined Continental Baking Co., best known as the maker of Wonder Bread.

They lived in Washington, and later the city’s Maryland suburbs, for nearly 50 years before retiring.

The baking company went bankrupt. But even that turned out to have a silver lining. “Come to find out my retirement, pensions and all that was way more than I was making than when I was getting a paycheck,” he said.

After decades in D.C., they wanted to return to Hampton Roads. Initially they looked at homes in Williamsburg but sensed a higher calling to return to their home, Smithfield, in 2016.

“Williamsburg was our choice. God’s choice was to come back home,” Claudia said. Both of their moms are still here — James’ mom is 90 and Claudia’s is 92.

On Feb. 27, James and Claudia will celebrate their jubilee anniversary with a renewal of vows at the pavilion on Main Street in front of The Smithfield Times office. They’ll tour several sites in historic downtown and conclude the celebration with a visit to the Westside school campus where their love story began a half-century ago.

Nicholas O’Reilly of Smithfield, who had the honor of being the first official customer to walk through the doors of... read more