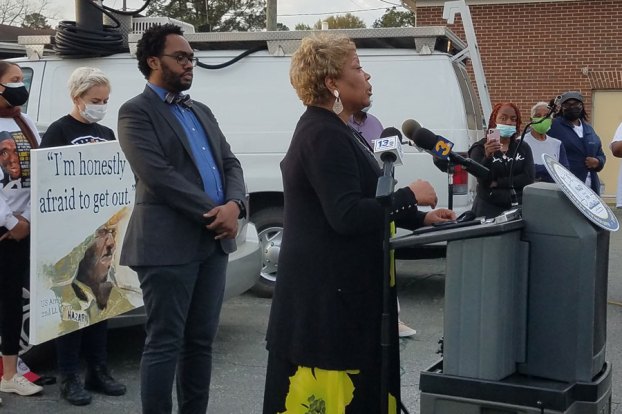 Isle of Wight NAACP Chapter President Valerie Butler speaks at an April 12 press conference concerning the incident involving 2nd Lt. Caron Nazario and Windsor police officers Daniel Crocker and Joe Gutierrez. Behind her is state NAACP Executive Director Da’Quan Love and Chelsea Lembert, a Navy spouse from Windsor who made a handpainted sign featuring Nazario and his “I’m honestly afraid to get out” quote. Stephen Faleski | The Smithfield Times

State and local NAACP officials are calling for an end to qualified immunity for Virginia law enforcement as an Army officer’s lawsuit against two Windsor police officers continues to make national headlines.

State Del. Jeff Bourne, who’s sponsoring a bill to do exactly that, traveled to Windsor April 12 to participate in a press conference hosted by Isle of Wight County’s NAACP chapter, held in the parking lot of the town’s municipal building in view of the BP gas station where the incident involving 2nd Lt. Caron Nazario and officers Daniel Crocker and Joe Gutierrez occurred.

Video footage of the incident, which has now circulated nationally, shows both officers approaching Nazario’s vehicle, guns drawn, and Gutierrez using pepper spray on Nazario and forcing him to the ground. Isle of Wight’s NAACP chapter was quick to condemn the incident, and chapter president Valerie Butler still has questions for the department.

Specifically, she wants to know what date the department’s internal investigation referenced in a press release the town issued Sunday evening began, when it concluded, and the exact date of Gutierrez’s termination. She’s also asking if Crocker was ever disciplined and if he’s still out patrolling Windsor’s streets.

“If so, we are immediately calling for his termination,” Butler said.

Virginia Attorney General Mark Herring hopes to soon be able to answer some of these questions. Just prior to the start of the press conference, his Office of Civil Rights requested the department send over numerous records, including those concerning the employment status of the two involved officers and any other allegations of racial profiling or police brutality within the department over the past 10 years.

State Del. Don Scott agrees with Butler that if Crocker isn’t already fired, he should be.

“I’m a former naval officer myself, and one of the things that made me sick to my stomach was to see this man in uniform being disrespected in the manner and the way that he was treated,” Scott said, referring to the video footage from Nazario’s cell phone and the body cams of the two officers.

“It was shameful; it was embarrassing; it was disgusting. Neither one of those officers who perpetrated those acts should be wearing that uniform right now. They should not be in this community doing this type of work.”

According to Bourne, the offense for which Nazario was pulled over — a supposedly missing rear license plate — shouldn’t have warranted a traffic stop in the first place per recent changes to state law. Nazario, in fact, had a temporary license plate affixed to his vehicle’s rear window.

“We passed a bill in the summer [of 2020] that made these types of stops for minor traffic infractions illegal and unfortunately it was too late for Lieutenant Nazario,” he said.

She and other NAACP officials are asking the public to sign an online petition asking Gov. Ralph Northam to call a special session of the General Assembly for the purpose of passing Bourne’s bill. The petition, available at demandaspecialsession.com, had 1,500 signatures as of the time of the press conference, according to Virginia’s NAACP executive director, Da’Quan Love.

According to the American Bar Association, qualified immunity shields government employees from liability for their misconduct, even if they break the law. Under the doctrine, police officers can never be sued for violating someone’s civil rights, unless they violated “clearly established law.”

Bourne and Scott admit ending it will only make it easier for people like Nazario to sue officers after-the-fact for misconduct. To prevent misconduct from occurring in the first place, Scott is suggesting the state consider revising its Law Enforcement Procedural Guarantees Act.

“Go look at it; it protects officers when they get in trouble, when they do something wrong,” Scott said. “It gives them more due process than the average citizen.”

Love then asked attendees to imagine the experience of driving while Black or Brown on dark roads across the state, and the number of similar incidents that may have happened but not been captured on video.

“Ladies and gentlemen, the time for statements and sympathies is over,” Love said. “We deserve action and we deserve it right away.”

One of the officers involved in a December traffic stop in Windsor that garnered nationwide attention this week has been... read more