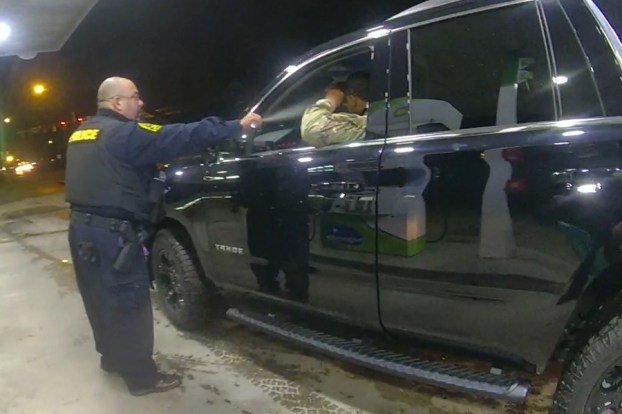 One of the two police officers seen on video holding Army 2nd Lt. Caron Nazario at gunpoint during a December traffic stop has been fired, according to a press release from the town of Windsor.

Town Manager William Saunders emailed the press release to media after 9 p.m. on Sunday. Reactions from local, state and federal officials continued to pour in over the weekend as the video and story made national headlines.

Officer Joe Gutierrez’s use of pepper spray triggered an internal investigation “immediately” after the incident, which determined that “Windsor Police Department policy was not followed” and resulted in disciplinary action and department-wide requirements for additional training beginning in January, the press release states. Since that time “Officer Gutierrez was also terminated from his employment.”

The employment status of the other involved officer, Daniel Crocker, remains unclear.

Nazario, who is of Latinx and African American descent, was in uniform driving home from his duty station the evening of Dec. 5, 2020, when Crocker and Gutierrez pulled him over, allegedly for not having a rear license plate and “dark tinted windows.” Nazario had temporary license plates displayed in his rear window, but the officers claimed they didn’t see them, and accused him of “eluding police” — owing to his having driven below the speed limit until he found a well-lit area to stop: a BP gas station.

Gutierrez is seen on video pepper-spraying Nazario while he was still in his vehicle and then wrestling him to the ground once he began to exit. Nazario filed a lawsuit against both officers in federal court in Norfolk April 2, which asks for a minimum of $1 million.

In the press release, the town asks the Virginia State Police to conduct an independent investigation — something Gov. Ralph Northam also urged in a statement Sunday.

“We are saddened for events like this to cast our community in a negative light, Saunders’ press release states. “Rather than deflect criticism, we have addressed these matters with our personnel administratively, we are reaching out to community stakeholders to engage in dialogue, and commit ourselves to additional discussions in the future.”

Northam called the Windsor incident “disturbing” and said it angered him.

“Our Commonwealth has done important work on police reform, but we must keep working to ensure that Virginians are safe during interactions with police, the enforcement of laws is fair and equitable, and people are held accountable,” the governor said. “I am inviting Army medic Lieutenant Caron Nazario to meet soon — we must all continue the larger dialogue about reform in our country.”

Virginia’s House Democratic Caucus also condemned the department’s conduct, stating, “The footage of Windsor police officers conducting themselves in an undeniably unprofessional and unethical manner reflects why Black and Brown communities fear and distrust the police,” the statement read. “Behavior like this tarnishes the work of all law enforcement and undermines efforts to create trust between police officers and communities. We call for a full and transparent investigation into the actions of the officers involved. No one is above the law, especially those sworn to uphold it.”

“This video is evident of what the NAACP has been saying all along,” said Isle of Wight NAACP President Valerie Butler. “It appears from this video that our justice is still being abused by police officers and we are very concerned. We are launching a separate investigation into The Windsor Police department involving this matter. We have the support of the Virginia State Conference of the NAACP, Congressman Bobby Scott’s Office and others. Please know this will not go unaddressed. We are done dying. We will not stand silently while another African American’s civil rights are violated.”

The Fraternal Order of Police of Virginia, the state’s branch of the world’s largest organization of sworn law enforcement officers, “supports a comprehensive investigation of the Windsor Police stop of U.S. Army 2nd Lt. Caron Nazario,” said Virginia FOP President John H. Ohrnberger. “The FOP of Virginia does not condone excessive use of force in any way, and that appropriate action should be taken upon completion of an investigation.”

“I will state for the record – no deputies from the Isle of Wight County Sheriff’s Office were present or in any way involved in this traffic stop,” said County Sheriff James R. Clarke Jr.

“When the matter is fully investigated, my hope is that justice and fairness will prevail,” Clarke added. “The professional men and women of the Isle of Wight County Sheriff’s Office have worked hard to build positive and constructive relationships with all who live, work, or visit our County. We will continue to conduct ourselves in a manner that holds the public faith and trust as a priority.”

Del. Emily Brewer, the Republican representative for Isle of Wight County in Virginia’s House of Delegates, is also calling for an investigation — one that will be “full, transparent, and unbiased” according to a statement she made on Twitter Sunday.

“I was horrified when I viewed the recently released video footage of the police treatment of Caron Nazario, a second lieutenant in the U.S. Army,” Scott said. “This should have been a routine traffic stop and the video speaks for itself. The release of this video comes while the Hampton Roads community is still mourning the loss of Donovan Lynch who was killed by officers while their body worn cameras were not activated. Both of these instances should be investigated by federal authorities.

“These dangerous and tragic events highlight why the House of Representatives passed the George Floyd Justice In Policing Act. I urge my Senate colleagues to immediately pass this legislation and send it to President Biden’s desk for signature. It would be a critical first step in reforming policing in America.”

Lynch was killed the night of March 26 in Virginia Beach as police responded to two shooting incidents. Police initially described Lynch as an “armed citizen,” but Virginia Beach Police Chief Paul Neudigate later said his officers found a gun “in the vicinity” of the shooting and didn’t have any evidence it belonged to Lynch, the Virginian-Pilot reported. The officer who killed Lynch was wearing a body camera, but it wasn’t activated and investigators don’t know why.