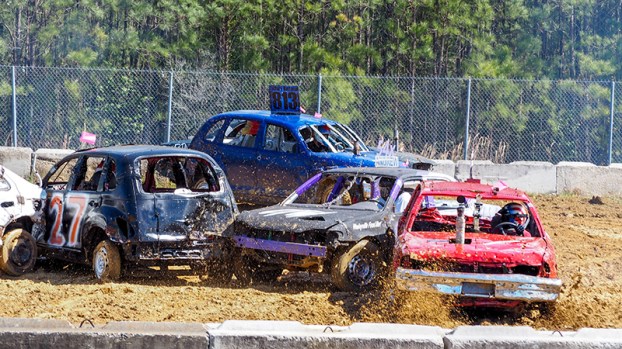 Derby goers enjoyed a spring carnival along with the mud flying from the derby and a truck and tractor pull at the Isle of Wight County Fairgrounds Saturday.

There are a lot of rules for entering a demolition derby.

The entry form for the one at the Isle of Wight County Fairgrounds on Sunday states only hardtop sedans or station wagons were allowed — no limousines, convertibles, jeeps or hearses.

The driver’s and passenger’s front doors must be painted white as to allow for numbering. Each car’s interior must be stripped down to bare metal, save for the dashboard, and even that’s optional.

You’re welcome to repaint the rest of the body any way you’d like, or even put a sign on the roof as long as it’s nothing profane or derogatory. But no flags other than the American flag may be affixed to the roof.

All glass windows, exterior plastic, fiberglass, chrome moldings and lights must be removed to keep anything from flying off during an impact and potentially injuring another driver. Car batteries must also be relocated from the engine hood to the passenger-side floor, where they must be securely fastened and covered — to reduce the likelihood of them exploding.

A four-point cage consisting of a dash bar, a bar behind the driver’s seat and a bar down each door not to exceed 12 inches past the seat bar is recommended for driver safety.

And anyone age 16 or 17 who wishes to participate as a driver or pit crew must have a notarized release signed by his or her parent or legal guardian.

After all, the whole idea is to deliberately collide with other cars on the track until only one vehicle — the winner — is still running.

Bad sportsmanship or failure to follow the rules by any driver or member of that driver’s pit crew means disqualification.

Brian Belcher of Virginia Beach has been doing this sport since 2018, after wanting to try it since childhood. He was one of the drivers at Sunday’s Sarge & Sons demolition derby at the fairgrounds.

So far, he’s managed to walk away from each race unscathed, save for a few bruised ribs.

He brought two cars to the Isle of Wight derby: a Pontiac Sunfire and a Chevrolet Lumina, both from the 1990s. It can be an expensive hobby, he admits, as the cars are rarely in usable condition afterward.

For those just getting into the sport, buying a suitable car from a junkyard or on Craigslist can cost anywhere from $100 to $500.

“And it just goes up from there,” Belcher said.

Then you have to know enough about automotive mechanics to make them drivable and compliant with derby rules — only to deliberately crash them.

“If it’s going to cost more to fix it than what it’s worth, scrap it and get another,” he said.

Hosting a truck and tractor pull and demolition derby at the fairgrounds in April has become an annual tradition for Isle of Wight County’s Department of Parks and Recreation, but this was the first year they combined those two events with a Spring Carnival, complete with rides county residents typically have to wait until September’s county fair to enjoy. The truck and tractor pull scheduled for Saturday was cancelled on account of rain, but the demolition derby went ahead as planned.

“We wanted to include some more activities that the kids could enjoy,” said Jenilee Hallman, the department’s fair and events coordinator.

Last year, statewide COVID-19 restrictions, coupled with rising case numbers, forced the county to cancel its 2020 fair. Now that roughly one in four Virginians are fully vaccinated, state restrictions on public gatherings have relaxed to permit up to 30% capacity at the county fairgrounds, a figure that translates to about 12,000 people, Hallman said.

“We’re still requiring masks,” Hallman added, though few wore them the day of the derby.

The bleachers were also packed, despite county staff having marked off distances six feet apart to help facilitate social distancing.

‘Caught in the frenzy’

An unprecedented real estate market in the midst of a pandemic Like many things in the past year, the real... read more