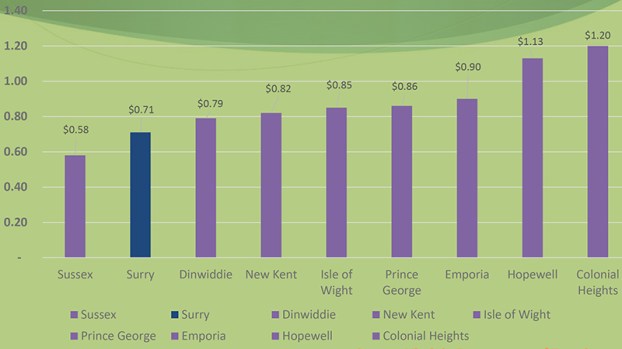 Surry County is proposing a 6-cent real estate tax increase in its 2021-2022 budget.

The draft budget totals roughly $28.2 million, with upwards of 50% of its revenue coming from public service corporation taxes — mostly from Dominion’s Surry nuclear power plant. According to County Administrator Melissa Rollins, this source of revenue is projected to drop by $710,000 in the coming fiscal year, creating a gap in the county’s finances equivalent to two and a half cents of real estate tax.

A number of factors are driving the remainder of the proposed tax increase. On the revenue side, the county is anticipating a $105,000 decline in its investment income due to the COVID-19 pandemic driving interest rates to historic lows. On the expenditure side, the county is looking at upwards of half a million dollars in new county personnel, a proposed 5% raise for county staff and a roughly $294,000 increase in local funding of the county’s school system. There’s also a $182,000 increase in debt service to cover the money the county borrowed last year to upgrade its public safety radio system, increased mandated costs for the state’s Children’s Services Act and increased contractual costs for jail and juvenile detention.

The increase in school funding is tied primarily to a 5% salary increase for teachers and school staff mandated in the state’s 2020-2022 biennial budget. Some school divisions chose to split the required raises over a two-year period last year, but Surry County didn’t and therefore must give the full 5% this coming year.

“We’re looking at a situation where we’re really behind the eight-ball because taxes have not been raised in the county for the past 11 years,” said Board of Supervisors Chairman Robert Elliott. “Any type of tax increase is not going to be favorable, but once the public realizes the position that we are in then I think they will be in tune and in step with us.”

On April 15, Rollins had proposed raising the real estate tax by 5 cents, though 11 cents would have been needed to fund the $28.9 million in budget requests county departments, the schools and outside agencies made this year.

At an April 21 budget work session, Elliott suggested the board advertise a 6-cent real estate tax increase to fund public safety needs in the county’s capital improvements budget, to include additional replacement Sheriff’s Office vehicles. Many have upwards of 200,000 miles on their engines, he said.

Per state law, the tax rates a locality lists when it publishes the state-mandated newspaper advertisement of a public hearing are the maximum it can adopt for that coming fiscal year. The board can subsequently decide to enact a lower tax increase, or no increase at all, but cannot go over the rates listed.

No other tax increases aside from real estate are proposed.

To offset the impact of a 6-cent tax increase on the county’s elderly and those with disabilities living on fixed incomes, Elliott suggested the board increase the maximum tax exemption for these groups from the current $750 to $1,000.

Surry County currently charges a real estate tax of 71 cents per $100 of assessed value. Isle of Wight County, by comparison, charges 85 cents and is planning to raise its rate to 89 cents this coming fiscal year to help fund the construction of new schools and public safety capital expenditures.

Tim Calhoun, however, who represents the county’s Surry District, suggested additional cuts could be made to Surry’s local funding of its school system, given that the state is forecasting a 16% drop in enrollment from its pre-pandemic population of 740 students.

“To me, it’s astronomical that we pay so much money to the school system,” Calhoun said. “I would have expected some type of cuts somewhere.”

“I am expecting that once we get through this pandemic that those students will return to us,” she said.

Even before the pandemic, Surry’s public school enrollment had been declining for years, but the division is still required by state law to provide and staff certain programs, whether there’s 50 students taking a particular class or 10, she said.

“This is not just an issue for Surry County; it’s an issue for quite a few small and rural school divisions,” Sims said.

Surry has scheduled a public hearing on its proposed budget for May 13 at 7 p.m., with a final vote on the matter scheduled for the same time May 20.

Jamie Kanell, a native of England who now lives in Norfolk, describes her involvement with the Regency Society of Virginia... read more