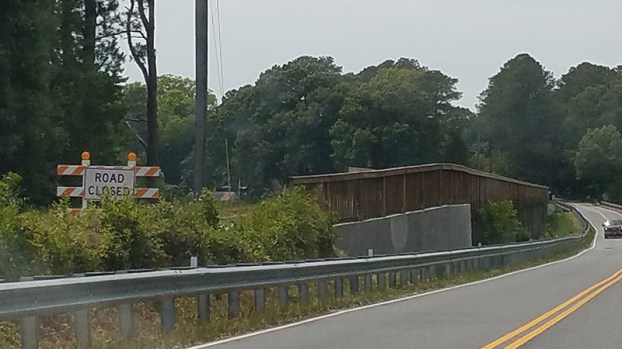 The park-to-park trail is still closed as inspectors complete their work.

Not quite, county says

Isle of Wight County officials are asking bicyclists and pedestrians to stay off the newly completed sections of the Carrollton to Smithfield park-to-park trail while they await inspection results.

Most sections of the trail are now paved, and a roughly 210-foot timber and concrete bridge now spans Jones Creek. But the trail is not yet open for public use, and likely won’t be until some time in June, Assistant County Administrator Don Robertson said. Once inspectors sign off on the trail and “punch list” items are finalized, the county plans to host a grand opening or ribbon-cutting ceremony.

“We know that people are excited about getting outside and walking/biking on the trail but … stay off the new sections of the trail (particularly the bridge) until all of the inspections and work have been completed,” Robertson said. “We want to make it available to the community as soon as it is safe to do so.”

As the inspections may reveal issues that need to be addressed before the trail opens, he’s hesitant to say that the construction has been completed.

Plans for the trail began to take shape in 2006, with funding via a combination of state and federal grants and local tax dollars from Isle of Wight County and the town of Smithfield.

The county’s portion, which spans from Nike Park to the intersection of Battery Park Road and South Church Street in Smithfield, is projected to cost roughly $6 million, with just over $4 million coming from grant money. It was originally budgeted at $4.1 million, but was over budget by roughly $2 million in 2017 — resulting in the county reallocating funds it had planned to spend on Route 620 road repairs to cover the shortfall and avoid having to repay the grant money.

The town’s portion of the trail will span from Battery Park Road down South Church Street and across the Cypress Creek Bridge to Windsor Castle Park. As of 2019, Smithfield’s portion was projected to cost anywhere from $2.5 million to $3.3 million depending on whether the town opts for a five-foot concrete sidewalk versus a 10-foot asphalt trail, and the route the town chooses.

To help make this decision, the town funded a roughly $62,000 engineering survey, which was still in progress as of this month. Town Manager Michael Stallings said he hoped to have the survey on the agenda for the Town Council committee meetings scheduled for 3 p.m. May 24 and 25 at The Smithfield Center.

A Smithfield woman found a plastic bag containing pebbles and a neo-Nazi flyer in her front yard May 18. The... read more