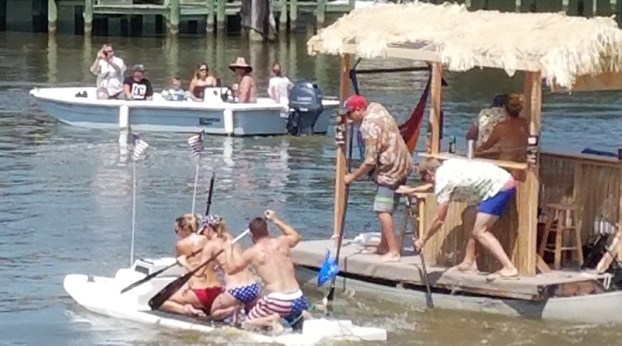 The Pagan River Raft Race has been canceled this year due to a lack of participants having signed up by the June 5 deadline.

The event, hosted by the Smithfield Station hotel, restaurant and marina, had been scheduled for June 19 at 2 p.m. Traditionally, it has served as the final attraction of the town’s Olden Days festival in late June. Town residents and visitors would gather along the shoulder of the Cypress Creek Bridge and on the grounds of Smithfield Station and watch as teams paddled from the lineup at the bridge to a buoy near the station’s lighthouse and back in rafts constructed from existing floating hulls or — in the case of the Huck Finn division — entirely homemade crafts. The winners of each race category — modified, Huck Finn (homemade) and children — would then race each other for the title of King or Queen of the Creek and a chance to get their names added to a plaque of past winners on display at the station.

The event was canceled last year due to the COVID-19 pandemic and this year, only one team had applied.

“I think maybe the Pagan River Raft Race has run its course,” said Randy Pack, who has co-owned Smithfield Station with his brother, Brian, since taking over from their parents, Ron and Tina.

The last Olden Days festival was in 2018. After that, Smithfield and Isle of Wight Tourism revamped the event to make it more attractive to families with young children and at a time of year when extreme heat would be less of a problem.

According to Connie Chapman, Tourism’s special events coordinator, soaring temperatures at the end of June caused seven heat-related medical emergencies requiring Isle of Wight Volunteer Rescue Squad intervention in 2018. There had also been safety issues with antique car show participants leaving prior to the event’s conclusion and “some serious complaints about the festival not being inclusive enough,” Chapman said.

But when Olden Days went away, “I think the raft race went with it,” Randy Pack said.

Tourism’s plans for a replacement festival for Olden Days were dashed in 2020 and again in 2021 due to the continued risk of spreading COVID-19. But Chapman says plans are in the works to host a downtown Smithfield Arts Festival May 21, 2022, which will feature visual, performing and culinary arts.

“Tourism plans to partner with the Isle of Wight Arts League, schools, the local theater, and of course our local shops, restaurants, and attractions to create this new event,” Chapman said. “We genuinely expect this will become a new local and tourist favorite.”

On her way to school, Smithfield High School junior Elise Ring would look out the car window and see trash... read more