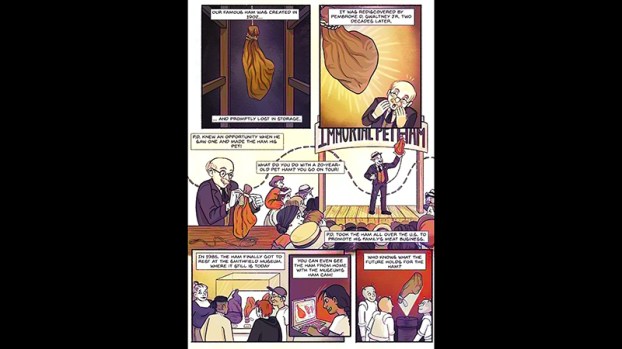 Maggie Colangelo, a VCU student, illustrated a one-page comic that tells the story of the world's oldest Smithfield ham.

In 1902, one of P.D. Gwaltney Jr.’s Smithfield hams was overlooked and, for 20 years, hung from a rafter inside a packing house.

When Gwaltney found it in the 1920s, he fashioned a brass collar for it, called it his “pet” and toured it around the country, touting it as the world’s oldest ham and evidence of the preservative powers of his curing method.

In 1985, the Isle of Wight County Museum gained custody of the ham, where it remains preserved under glass to this day.

Those who attended the 119th birthday party museum staff hosted for the ham July 10 – a date intended to reflect when hams cured in the fall or winter would be ready for consumption – may have already heard the local legend. But for those who haven’t, what better way to tell an origin story than through a comic strip?

Means and Colangelo recently collaborated to produce a comic strip featuring the ham and its story.

Means specializes in three-dimensional imaging of archeological artifacts for several museums, including Isle of Wight, and had taken scans of the ham on invitation from the museum’s former curator, Tracey Neikirk, in 2015. Colangelo, who’s been teaching herself to draw comics since high school, met Means in 2019 when her 3D modeling class toured the lab.

“I saw the amazing community and instantly wanted to be a part of it, so I started volunteering to clean and paint the models,” Colangelo said. “While we were working, Dr. Means struck up a conversation about comics, which we both enjoy.”

That conversation led to her receiving a VCU fellowship last year to create a comic book with Means titled “Founding Monsters,” which tells the story of how founding fathers Thomas Jefferson, Benjamin Franklin and George Washington were fascinated by fossils of mastodons, mammoths and other Ice Age animals that once roamed North America. When Jennifer England, director of the Isle of Wight County Museum, read the “Founding Monsters” comic, she reached out and requested the pair do another featuring the ham.

In a video interview the museum aired to its Facebook page, Means said the ham comic began with his writing a crude script.

“I turned it over to Maggie and Maggie did her Maggie magic,” he said.

“The main change that I made between the framework I was given and the end result is the middle section, which has two bleed panels instead of two normal panels,” Colangelo said in a video interview recently published to the museum’s Facebook page. “A bleed panel is a panel without that border that comics have and it just adds a little visual interest and sort of a montage of that as as P.D. found the ham and then spent a long time touring it all around the country. After all of that plan work was done it was pretty simple to just draw it, color it and shade it. and then we had our end result, which I’m pretty proud of.”

Colangelo’s interest in comics began in childhood when she would read whatever happened to be available around the house, which included cartoons like “The Far Side,” “Doonesbury” and political cartoons from the 1980s.

“They didn’t make much sense to me, but I enjoyed them anyway,” she said.

She taught herself to draw her own comics by copying techniques she observed in the books. During her time at VCU, she’s even taken courses focused solely on comics.

“A large part of communication arts is narrative/sequential art, or art that tells a story … I’ve done several comics for that class, but ‘Founding Monsters’ is my longest comic by far,” she said.

For the moment, Colangelo has limited her work mainly to factual comics.

But one of her long-term goals is to one day write her own graphic novel.

“I do want to start writing fictional comics as well so I can write the kind of stories I know I’d enjoy reading,” she said

Her main goal in writing comics is to get children engaged, whether it be writing historical comics like the ones she’s done with Means or her dream of one day combining her environmental science and comic-drawing expertise to educate people on environmental issues.

Heading up biggest offshore wind project in the U.S., Dominion Energy’s Lloyd Eley has prepared for this moment When he... read more