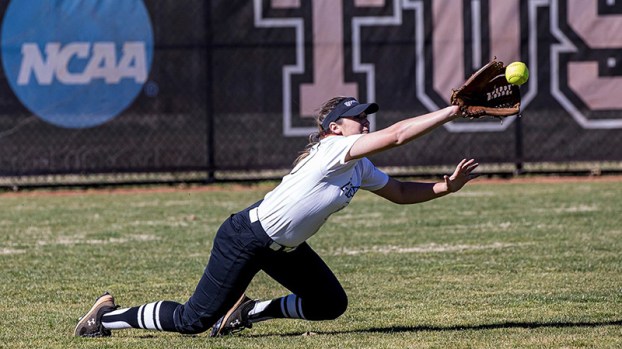 The Smithfield High School graduate’s work resulted in her playing the most games among the Tusculum University (Tenn.) true freshmen during the spring.

Among seven on the roster listed solely or partly as a utility player, she appeared in 40 of the 42 games, twice as many as the next true freshman.

“The biggest thing that is really exciting is she came in and did it as a freshman,” Tusculum head softball coach Julie Huebner said. “She worked her tail off and became a key contributor for us down the stretch.”

“Claire was an athlete that I was constantly coaching hard and daily,” she said. “She is super coachable.”

The daughter of Stan and Melinda Smeltzer wasn’t even sure about a softball future out of high school. A nursing major, she said she heard, “it’s very hard to play softball and be a nursing major.”

She visited schools with established nursing programs, thinking her focus would be academic only. But then Huebner contacted her with interest in having Smeltzer as a player, and she made an unofficial visit in August of her senior year.

Smeltzer realized she could manage softball and school at Tusculum. “It was definitely a good experience,” she said.

Because versatility is a trait of a utility player, she spent hours practicing at different positions. She practiced at first base in the fall, yet played left field during the season.

“Sometimes my days are a little bit longer,” she said. “It’s nice to play more than one position, and it opens up opportunities for me.”

In the outfield, she learned to quickly read balls off the bat and take her first step. “It’s like a split-second decision,” said Smeltzer, who had a .947 fielding percentage in 57 chances. “It’s not like the infield when you have somebody behind you (backing up the play).”

The coach cited her lateral movement to each side and her ability to make the routine plays. “Her arm strength is probably her best asset out there,” Huebner said.

The 5-foot-7 left-hander batted .316, fourth among the Pioneer starters, and had 14 runs batted in, sixth on the squad.

She said she was nervous at the plate early in the season, and her overthinking did not help. Then she adopted an approach to simply make contact and keep the ball in play. “I didn’t have any cares,” she said of the strategy. “I started doing well.”

Once she relaxed her mind, she hit. Three of her 10 multi-hit games came in the first four games. By the third week of the season, though, she struggled to make contact, for eight of her 17 strikeouts came in five games during a two-week span.

“I was trying to get under the ball and trying to do too much,” she said. “I was dropping my back shoulder and getting under it (the ball). I was popping it up.”

Her consistency returned when she corrected the placement of her hands. She didn’t strike out in 13 consecutive games from March to April.

During that run she matched her season high of three hits, all singles, in three at-bats during a 3-0 win over Coker College. Batting in the second third of the order, she led players from both teams in hits. “She peaked at the right time,” Huebner said.

Smeltzer finished the season with a career-high six-game hitting streak. She was named to the South Atlantic Conference Championship All-Tournament Team after batting .500 in the three games of the tournament, including doubling in each game.

The Smithfield Dolphins held its second meet of the season on June 23 at the Smithfield Pool. The team score... read more