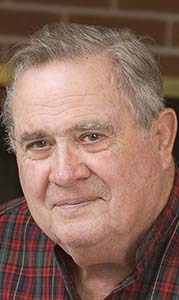 Charles Whitfield White Sr. slipped gently into the arms of the Lord Tuesday evening, Aug. 10, 2021, surrounded by family. He was 89 years old.

Charlie, as he was known by his many friends, attended Coyne Radio School in Chicago and was a prominent businessman in Smithfield for several decades. He served in the U.S. Army in Korea and continued to serve his community upon his return, through many civic organizations. He was a member of the Jaycees, Kiwanis, Veterans of Foreign Wars, and others. Charlie also served on the Isle of Wight County Wetlands board. He was very active in Christ Episcopal Church and lent his many talents to projects there.

He was preceded in death by a son, Stephen, sister, Anne, and brother, Gwaltney. He is survived by his wife of 67 years, Rosemarie, and sons, Charles and Mark, along with three grandchildren, five great-grandchildren, and numerous nieces and nephews.

Charles Brian “Fuzzy” Gwaltney passed from this life to meet his savior on July 29, 2021, at the age of... read more